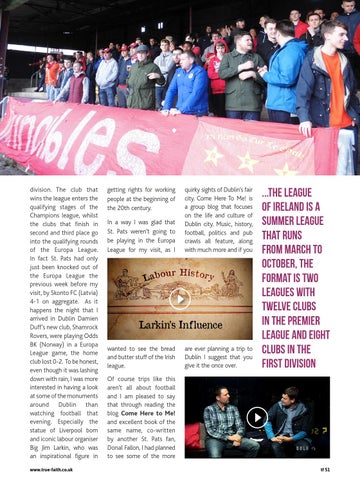 division. The club that wins the league enters the qualifying stages of the Champions league, whilst the clubs that finish in second and third place go into the qualifying rounds of the Europa League. In fact St. Pats had only just been knocked out of the Europa League the previous week before my visit, by Skonto FC (Latvia) 4-1 on aggregate. As it happens the night that I arrived in Dublin Damien Duff’s new club, Shamrock Rovers, were playing Odds BK (Norway) in a Europa League game, the home club lost 0-2. To be honest, even though it was lashing down with rain, I was more interested in having a look at some of the monuments around Dublin than watching football that evening. Especially the statue of Liverpool born and iconic labour organiser Big Jim Larkin, who was an inspirational figure in www.true-faith.co.uk

In a way I was glad that St. Pats weren’t going to be playing in the Europa League for my visit, as I

quirky sights of Dublin’s fair city. Come Here To Me! is a group blog that focuses on the life and culture of Dublin city. Music, history, football, politics and pub crawls all feature, along with much more and if you

wanted to see the bread and butter stuff of the Irish league.

are ever planning a trip to Dublin I suggest that you give it the once over.

getting rights for working people at the beginning of the 20th century.

...the League of Ireland is a summer league that runs from March to October, the format is two leagues with twelve clubs in the premier league and eight clubs in the first division

Of course trips like this aren’t all about football and I am pleased to say that through reading the blog Come Here to Me! and excellent book of the same name, co-written by another St. Pats fan, Donal Fallon, I had planned to see some of the more tf 51