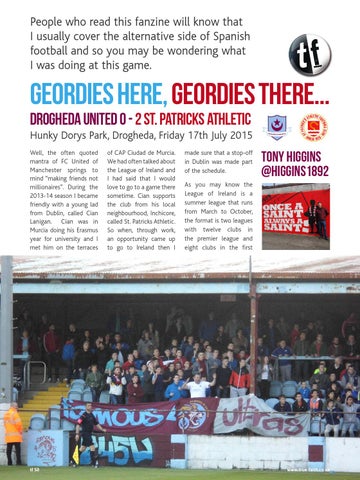 People who read this fanzine will know that I usually cover the alternative side of Spanish football and so you may be wondering what I was doing at this game.

Geordies here, geordies there... Drogheda United 0 - 2 St. Patricks Athletic Hunky Dorys Park, Drogheda, Friday 17th July 2015 Well, the often quoted mantra of FC United of Manchester springs to mind â&amp;#x20AC;&amp;#x153;making friends not millionairesâ&amp;#x20AC;?. During the 2013-14 season I became friendly with a young lad from Dublin, called Cian Lanigan. Cian was in Murcia doing his Erasmus year for university and I met him on the terraces

of CAP Ciudad de Murcia. We had often talked about the League of Ireland and I had said that I would love to go to a game there sometime. Cian supports the club from his local neighbourhood, Inchicore, called St. Patricks Athletic. So when, through work, an opportunity came up to go to Ireland then I

made sure that a stop-off in Dublin was made part of the schedule.

As you may know the League of Ireland is a summer league that runs from March to October, the format is two leagues with twelve clubs in the premier league and eight clubs in the first