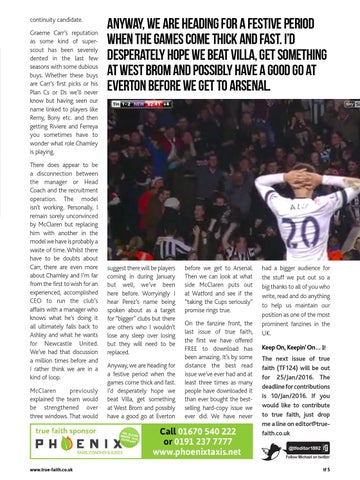 continuity candidate. Graeme Carr’s reputation as some kind of superscout has been severely dented in the last few seasons with some dubious buys. Whether these buys are Carr’s first picks or his Plan Cs or Ds we’ll never know but having seen our name linked to players like Remy, Bony etc. and then getting Riviere and Ferreya you sometimes have to wonder what role Charnley is playing. There does appear to be a disconnection between the manager or Head Coach and the recruitment operation. The model isn’t working. Personally, I remain sorely unconvinced by McClaren but replacing him with another in the model we have is probably a waste of time. Whilst there have to be doubts about Carr, there are even more about Charnley and I’m far from the first to wish for an experienced, accomplished CEO to run the club’s affairs with a manager who knows what he’s doing it all ultimately falls back to Ashley and what he wants for Newcastle United. We’ve had that discussion a million times before and I rather think we are in a kind of loop. McClaren previously explained the team would be strengthened over three windows. That would

Anyway, we are heading for a festive period when the games come thick and fast. I’d desperately hope we beat Villa, get something at West Brom and possibly have a good go at Everton before we get to Arsenal.

suggest there will be players coming in during January but well, we’ve been here before. Worryingly I hear Perez’s name being spoken about as a target for “bigger” clubs but there are others who I wouldn’t lose any sleep over losing but they will need to be replaced. Anyway, we are heading for a festive period when the games come thick and fast. I’d desperately hope we beat Villa, get something at West Brom and possibly have a good go at Everton

before we get to Arsenal. Then we can look at what side McClaren puts out at Watford and see if the “taking the Cups seriously” promise rings true. On the fanzine front, the last issue of true faith, the first we have offered FREE to download has been amazing. It’s by some distance the best read issue we’ve ever had and at least three times as many people have downloaded it than ever bought the bestselling hard-copy issue we ever did. We have never

had a bigger audience for the stuff we put out so a big thanks to all of you who write, read and do anything to help us maintain our position as one of the most prominent fanzines in the UK. Keep On, Keepin’ On… The next issue of true faith (TF124) will be out for 25/Jan/2016. The deadline for contributions is 10/Jan/2016. If you would like to contribute to true faith, just drop me a line on editor@truefaith.co.uk