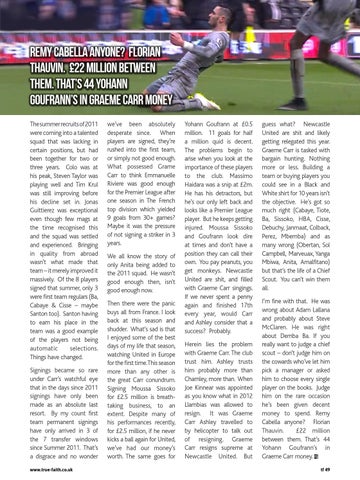 Remy Cabella anyone? Florian Thauvin. £22 million between them. That’s 44 Yohann Goufrann’s in Graeme Carr money The summer recruits of 2011 were coming into a talented squad that was lacking in certain positions, but had been together for two or three years. Colo was at his peak, Steven Taylor was playing well and Tim Krul was still improving before his decline set in. Jonas Guittierez was exceptional even though few mags at the time recognised this and the squad was settled and experienced. Bringing in quality from abroad wasn’t what made that team – it merely improved it massively. Of the 8 players signed that summer, only 3 were first team regulars (Ba, Cabaye &amp; Cisse – maybe Santon too). Santon having to earn his place in the team was a good example of the players not being automatic selections. Things have changed. Signings became so rare under Carr’s watchful eye that in the days since 2011 signings have only been made as an absolute last resort. By my count first team permanent signings have only arrived in 3 of the 7 transfer windows since Summer 2011. That’s a disgrace and no wonder www.true-faith.co.uk

we’ve been absolutely desperate since. When players are signed, they’re rushed into the first team, or simply not good enough. What possessed Grame Carr to think Emmanuelle Riviere was good enough for the Premier League after one season in The French top division which yielded 9 goals from 30+ games? Maybe it was the pressure of not signing a striker in 3 years. We all know the story of only Anita being added to the 2011 squad. He wasn’t good enough then, isn’t good enough now. Then there were the panic buys all from France. I look back at this season and shudder. What’s sad is that I enjoyed some of the best days of my life that season, watching United in Europe for the first time.This season more than any other is the great Carr conundrum. Signing Moussa Sissoko for £2.5 million is breathtaking business, to an extent. Despite many of his performances recently, for £2.5 million, if he never kicks a ball again for United, we’ve had our money’s worth. The same goes for

Yohann Goufrann at £0.5 million. 11 goals for half a million quid is decent. The problems begin to arise when you look at the importance of these players to the club. Massimo Haidara was a snip at £2m. He has his detractors, but he’s our only left back and looks like a Premier League player. But he keeps getting injured. Moussa Sissoko and Goufrann look dire at times and don’t have a position they can call their own. You pay peanuts, you get monkeys. Newcastle United are shit, and filled with Graeme Carr singings. If we never spent a penny again and finished 17th every year, would Carr and Ashley consider that a success? Probably. Herein lies the problem with Graeme Carr. The club trust him. Ashley trusts him probably more than Charnley, more than. When Joe Kinnear was appointed as you know what in 2012 Llambias was allowed to resign. It was Graeme Carr Ashley travelled to by helicopter to talk out of resigning. Graeme Carr resigns supreme at Newcastle United. But

guess what? Newcastle United are shit and likely getting relegated this year. Graeme Carr is tasked with bargain hunting. Nothing more or less. Building a team or buying players you could see in a Black and White shirt for 10 years isn’t the objective. He’s got so much right (Cabaye, Tiote, Ba, Sissoko, HBA, Cisse, Debuchy, Janmaat, Colback, Perez, Mbemba) and as many wrong (Obertan, Sol Campbell, Marveuax, Yanga Mbiwa, Anita, Amalfitano) but that’s the life of a Chief Scout. You can’t win them all. I’m fine with that. He was wrong about Adam Lallana and probably about Steve McClaren. He was right about Demba Ba. If you really want to judge a chief scout – don’t judge him on the cowards who’ve let him pick a manager or asked him to choose every single player on the books. Judge him on the rare occasion he’s been given decent money to spend. Remy Cabella anyone? Florian Thauvin. £22 million between them. That’s 44 Yohann Goufrann’s in Graeme Carr money. tf 49