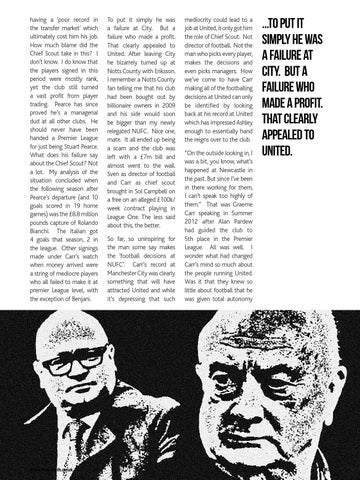 having a ‘poor record in the transfer market’ which ultimately cost him his job. How much blame did the Chief Scout take in this? I don’t know. I do know that the players signed in this period were mostly rank, yet the club still turned a vast profit from player trading. Pearce has since proved he’s a managerial dud at all other clubs. He should never have been handed a Premier League for just being Stuart Pearce. What does his failure say about the Chief Scout? Not a lot. My analysis of the situation concluded when the following season after Pearce’s departure (and 10 goals scored in 19 home games) was the £8.8 million pounds capture of Rolando Bianchi. The Italian got 4 goals that season, 2 in the league. Other signings made under Carr’s watch when money arrived were a string of mediocre players who all failed to make it at premier League level, with the exception of Benjani.

To put it simply he was a failure at City. But a failure who made a profit. That clearly appealed to United. After leaving City he bizarrely turned up at Notts County with Eriksson. I remember a Notts County fan telling me that his club had been bought out by billionaire owners in 2009 and his side would soon be bigger than my newly relegated NUFC. Nice one, mate. It all ended up being a scam and the club was left with a £7m bill and almost went to the wall. Sven as director of football and Carr as chief scout brought in Sol Campbell on a free on an alleged £100k/ week contract playing in League One. The less said about this, the better. So far, so uninspiring for the man some say makes the ‘football decisions at NUFC’. Carr’s record at Manchester City was clearly something that will have attracted United and while it’s depressing that such

mediocrity could lead to a job at United, it only got him the role of Chief Scout. Not director of football. Not the man who picks every player, makes the decisions and even picks managers. How we’ve come to have Carr making all of the footballing decisions at United can only be identified by looking back at his record at United which has impressed Ashley enough to essentially hand the reigns over to the club. “On the outside looking in, I was a bit, you know, what’s happened at Newcastle in the past. But since I’ve been in there working for them, I can’t speak too highly of them.” That was Graeme Carr speaking in Summer 2012 after Alan Pardew had guided the club to 5th place in the Premier League. All was well. I wonder what had changed Carr’s mind so much about the people running United. Was it that they knew so little about football that he was given total autonomy

...To put it simply he was a failure at City. But a failure who made a profit. That clearly appealed to United.