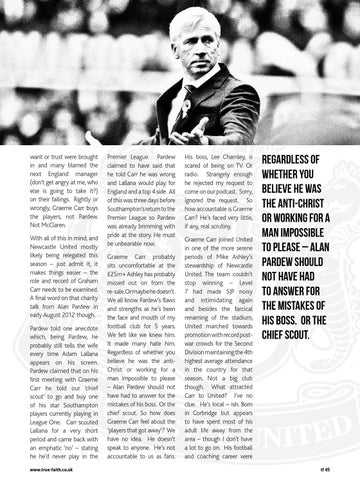 want or trust were brought in and many blamed the next England manager (don’t get angry at me, who else is going to take it?) on their failings. Rightly or wrongly, Graeme Carr buys the players, not Pardew. Not McClaren. With all of this in mind, and Newcastle United mostly likely being relegated this season – just admit it, it makes things easier – the role and record of Graham Carr needs to be examined. A final word on that charity talk from Alan Pardew in early August 2012 though. Pardew told one anecdote which, being Pardew, he probably still tells the wife every time Adam Lallana appears on his screen. Pardew claimed that on his first meeting with Graeme Carr he told our ‘chief scout’ to go and buy one of his star Southampton players currently playing in League One. Carr scouted Lallana for a very short period and came back with an emphatic ‘no’ – stating he he’d never play in the www.true-faith.co.uk

Premier League. Pardew claimed to have said that he told Carr he was wrong and Lallana would play for England and a top 4 side. All of this was three days before Southampton’s return to the Premier League so Pardew was already brimming with pride at the story. He must be unbearable now. Graeme Carr probably sits uncomfortable at the £25m+ Ashley has probably missed out on from the re-sale.Or maybe he doesn’t. We all know Pardew’s flaws and strengths as he’s been the face and mouth of my football club for 5 years. We felt like we knew him. It made many hate him. Regardless of whether you believe he was the antiChrist or working for a man impossible to please – Alan Pardew should not have had to answer for the mistakes of his boss. Or the chief scout. So how does Graeme Carr feel about the ‘players that got away’? We have no idea. He doesn’t speak to anyone. He’s not accountable to us as fans.

His boss, Lee Charnley, is scared of being on TV. Or radio. Strangely enough he rejected my request to come on our podcast. Sorry, ignored the request. So how accountable is Graeme Carr? He’s faced very little, if any, real scrutiny. Graeme Carr joined United in one of the more serene periods of Mike Ashley’s stewardship of Newcastle United. The team couldn’t stop winning – Level 7 had made SJP noisy and intimidating again and besides the farcical renaming of the stadium, United marched towards promotion with record postwar crowds for the Second Division maintaining the 4th highest average attendance in the country for that season. Not a big club though. What attracted Carr to United? I’ve no clue. He’s local – ish. Born in Corbridge but appears to have spent most of his adult life away from the area – though I don’t have a lot to go on. His football and coaching career were

Regardless of whether you believe he was the anti-Christ or working for a man impossible to please – Alan Pardew should not have had to answer for the mistakes of his boss. Or the chief scout.