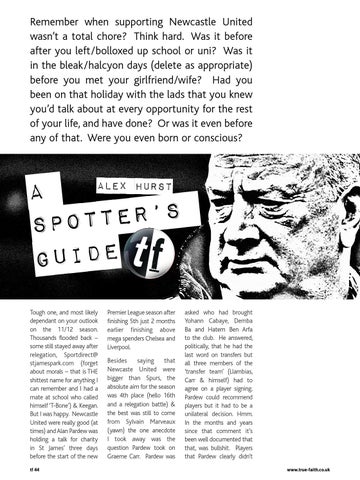 Remember when supporting Newcastle United wasn’t a total chore? Think hard. Was it before after you left/bolloxed up school or uni? Was it in the bleak/halcyon days (delete as appropriate) before you met your girlfriend/wife? Had you been on that holiday with the lads that you knew you’d talk about at every opportunity for the rest of your life, and have done? Or was it even before any of that. Were you even born or conscious?

Tough one, and most likely dependant on your outlook on the 11/12 season. Thousands flooded back – some still stayed away after relegation, Sportdirect@ stjamespark.com (forget about morals – that is THE shittest name for anything I can remember and I had a mate at school who called himself ‘T-Bone’) &amp; Keegan. But I was happy. Newcastle United were really good (at times) and Alan Pardew was holding a talk for charity in St James’ three days before the start of the new tf 44

Premier League season after finishing 5th just 2 months earlier finishing above mega spenders Chelsea and Liverpool. Besides saying that Newcaste United were bigger than Spurs, the absolute aim for the season was 4th place (hello 16th and a relegation battle) &amp; the best was still to come from Sylvain Marveaux (yawn) the one anecdote I took away was the question Pardew took on Graeme Carr. Pardew was

asked who had brought Yohann Cabaye, Demba Ba and Hatem Ben Arfa to the club. He answered, politically, that he had the last word on transfers but all three members of the ‘transfer team’ (Llambias, Carr &amp; himself) had to agree on a player signing. Pardew could recommend players but it had to be a unilateral decision. Hmm. In the months and years since that comment it’s been well documented that that, was bullshit. Players that Pardew clearly didn’t www.true-faith.co.uk