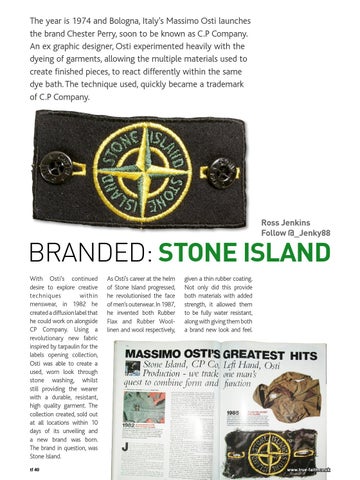 The year is 1974 and Bologna, Italy’s Massimo Osti launches the brand Chester Perry, soon to be known as C.P Company. An ex graphic designer, Osti experimented heavily with the dyeing of garments, allowing the multiple materials used to create finished pieces, to react differently within the same dye bath. The technique used, quickly became a trademark of C.P Company.

BRANDED: STONE ISLAND With Osti’s continued desire to explore creative techniques within menswear, in 1982 he created a diffusion label that he could work on alongside CP Company. Using a revolutionary new fabric inspired by tarpaulin for the labels opening collection, Osti was able to create a used, worn look through stone washing, whilst still providing the wearer with a durable, resistant, high quality garment. The collection created, sold out at all locations within 10 days of its unveiling and a new brand was born. The brand in question, was Stone Island. tf 40

As Osti’s career at the helm of Stone Island progressed, he revolutionised the face of men’s outerwear. In 1987, he invented both Rubber Flax and Rubber Woollinen and wool respectively,

given a thin rubber coating. Not only did this provide both materials with added strength, it allowed them to be fully water resistant, along with giving them both a brand new look and feel.