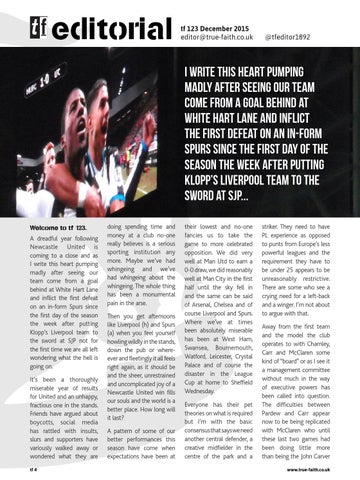 doing spending time and money at a club no-one really believes is a serious sporting institution any more. Maybe we’ve had whingeing and we’ve had whingeing about the whingeing. The whole thing has been a monumental pain in the arse. Then you get afternoons like Liverpool (h) and Spurs (a) when you feel yourself howling wildly in the stands, down the pub or whereever and fleetingly it all feels right again, as it should be and the sheer, unrestrained and uncomplicated joy of a Newcastle United win fills our souls and the world is a better place. How long will it last? A pattern of some of our better performances this season have come when expectations have been at

their lowest and no-one fancies us to take the game to more celebrated opposition. We did very well at Man Utd to earn a 0-0 draw, we did reasonably well at Man City in the first half until the sky fell in and the same can be said of Arsenal, Chelsea and of course Liverpool and Spurs. Where we’ve at times been absolutely miserable has been at West Ham, Swansea, Bournemouth, Watford, Leicester, Crystal Palace and of course the disaster in the League Cup at home to Sheffield Wednesday. Everyone has their pet theories on what is required but I’m with the basic consensus that says we need another central defender, a creative midfielder in the centre of the park and a

striker. They need to have PL experience as opposed to punts from Europe’s less powerful leagues and the requirement they have to be under 25 appears to be unreasonably restrictive. There are some who see a crying need for a left-back and a winger. I’m not about to argue with that. Away from the first team and the model the club operates to with Charnley, Carr and McClaren some kind of “board” or as I see it a management committee without much in the way of executive powers has been called into question. The difficulties between Pardew and Carr appear now to be being replicated with McClaren who until these last two games had been doing little more than being the John Carver www.true-faith.co.uk