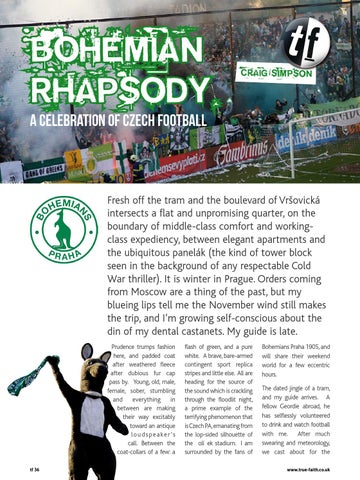 a celebration of Czech football

Fresh off the tram and the boulevard of Vršovická intersects a flat and unpromising quarter, on the boundary of middle-class comfort and workingclass expediency, between elegant apartments and the ubiquitous panelák (the kind of tower block seen in the background of any respectable Cold War thriller). It is winter in Prague. Orders coming from Moscow are a thing of the past, but my blueing lips tell me the November wind still makes the trip, and I’m growing self-conscious about the din of my dental castanets. My guide is late. Prudence trumps fashion here, and padded coat after weathered fleece after dubious fur cap pass by. Young, old, male, female, sober, stumbling and everything in between are making their way excitably toward an antique l o u d s p e a k e r ’s call. Between the coat-collars of a few: a tf 36

flash of green, and a pure white. A brave, bare-armed contingent sport replica stripes and little else. All are heading for the source of the sound which is crackling through the floodlit night, a prime example of the terrifying phenomenon that is Czech PA, emanating from the lop-sided silhouette of the Ďolíček stadium. I am surrounded by the fans of

Bohemians Praha 1905, and will share their weekend world for a few eccentric hours. The dated jingle of a tram, and my guide arrives. A fellow Geordie abroad, he has selflessly volunteered to drink and watch football with me. After much swearing and meteorology, we cast about for the www.true-faith.co.uk