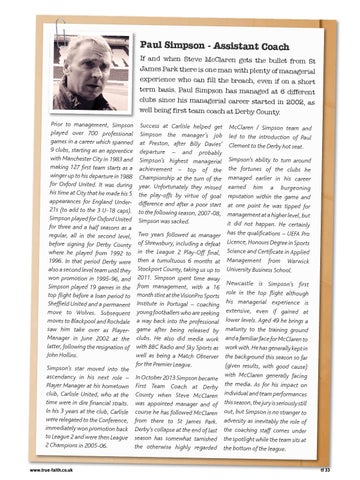 If and when Steve McClaren gets the bullet from St James Park there is one man with plenty of managerial experience who can fill the breach, even if on a short term basis. Paul Simpson has managed at 6 different clubs since his managerial career started in 2002, as well being first team coach at Derby County. Prior to management, Simpson played over 700 professional games in a career which spanned 9 clubs, starting as an apprentice with Manchester City in 1983 and making 127 first team starts as a winger up to his departure in 1988 for Oxford United. It was during his time at City that he made his 5 appearances for England Under21s (to add to the 3 U-18 caps). Simpson played for Oxford United for three and a half seasons as a regular, all in the second level, before signing for Derby County where he played from 1992 to 1996. In that period Derby were also a second level team until they won promotion in 1995-96, and Simpson played 19 games in the top flight before a loan period to Sheffield United and a permanent move to Wolves. Subsequent moves to Blackpool and Rochdale saw him take over as PlayerManager in June 2002 at the latter, following the resignation of John Hollins. Simpson’s star moved into the ascendancy in his next role – Player Manager at his hometown club, Carlisle United, who at the time were in dire financial straits. In his 3 years at the club, Carlisle were relegated to the Conference, immediately won promotion back to League 2 and were then League 2 Champions in 2005-06.

Success at Carlisle helped get Simpson the manager’s job at Preston, after Billy Davies’ departure – and probably Simpson’s highest managerial achievement – top of the Championship at the turn of the year. Unfortunately they missed the play-offs by virtue of goal difference and after a poor start to the following season, 2007-08, Simpson was sacked. Two years followed as manager of Shrewsbury, including a defeat in the League 2 Play-Off final, then a tumultuous 6 months at Stockport County, taking us up to 2011. Simpson spent time away from management, with a 16 month stint at the VisionPro Sports Institute in Portugal – coaching young footballers who are seeking a way back into the professional game after being released by clubs. He also did media work with BBC Radio and Sky Sports as well as being a Match Observer for the Premier League. In October 2013 Simpson became First Team Coach at Derby County when Steve McClaren was appointed manager and of course he has followed McClaren from there to St James Park. Derby’s collapse at the end of last season has somewhat tarnished the otherwise highly regarded

McClaren / Simpson team and led to the introduction of Paul Clement to the Derby hot seat. Simpson’s ability to turn around the fortunes of the clubs he managed earlier in his career earned him a burgeoning reputation within the game and at one point he was tipped for management at a higher level, but it did not happen. He certainly has the qualifications – UEFA Pro Licence, Honours Degree in Sports Science and Certificate in Applied Management from Warwick University Business School. Newcastle is Simpson’s first role in the top flight although his managerial experience is extensive, even if gained at lower levels. Aged 49 he brings a maturity to the training ground and a familiar face for McClaren to work with. He has generally kept in the background this season so far (given results, with good cause) with McClaren generally facing the media. As for his impact on individual and team performances this season, the jury is seriously still out, but Simpson is no stranger to adversity as inevitably the role of the coaching staff comes under the spotlight while the team sits at the bottom of the league. tf 33