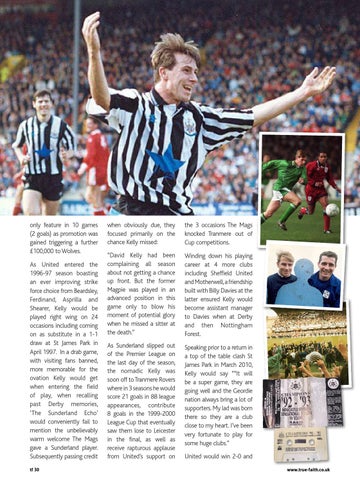 only feature in 10 games (2 goals) as promotion was gained triggering a further £100,000 to Wolves. As United entered the 1996-97 season boasting an ever improving strike force choice from Beardsley, Ferdinand, Asprilla and Shearer, Kelly would be played right wing on 24 occasions including coming on as substitute in a 1-1 draw at St James Park in April 1997. In a drab game, with visiting fans banned, more memorable for the ovation Kelly would get when entering the field of play, when recalling past Derby memories, ‘The Sunderland Echo’ would conveniently fail to mention the unbelievably warm welcome The Mags gave a Sunderland player. Subsequently passing credit tf www.true-faith.co.uk 30

when obviously due, they focused primarily on the chance Kelly missed:

the 3 occasions The Mags knocked Tranmere out of Cup competitions.

“David Kelly had been complaining all season about not getting a chance up front. But the former Magpie was played in an advanced position in this game only to blow his moment of potential glory when he missed a sitter at the death.”

Winding down his playing career at 4 more clubs including Sheffield United and Motherwell, a friendship built with Billy Davies at the latter ensured Kelly would become assistant manager to Davies when at Derby and then Nottingham Forest.

As Sunderland slipped out of the Premier League on the last day of the season, the nomadic Kelly was soon off to Tranmere Rovers where in 3 seasons he would score 21 goals in 88 league appearances, contribute 8 goals in the 1999-2000 League Cup that eventually saw them lose to Leicester in the final, as well as receive rapturous applause from United’s support on

Speaking prior to a return in a top of the table clash St James Park in March 2010, Kelly would say ““It will be a super game, they are going well and the Geordie nation always bring a lot of supporters. My lad was born there so they are a club close to my heart. I’ve been very fortunate to play for some huge clubs.” United would win 2-0 and www.true-faith.co.uk