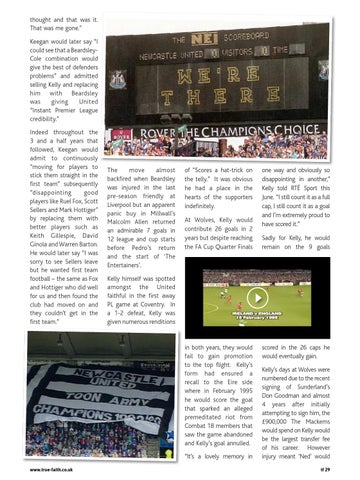 thought and that was it. That was me gone.” Keegan would later say “I could see that a BeardsleyCole combination would give the best of defenders problems” and admitted selling Kelly and replacing him with Beardsley was giving United “Instant Premier League credibility.” Indeed throughout the 3 and a half years that followed, Keegan would admit to continuously “moving for players to stick them straight in the first team” subsequently “disappointing good players like Ruel Fox, Scott Sellers and Mark Hottiger” by replacing them with better players such as Keith Gillespie, David Ginola and Warren Barton. He would later say “I was sorry to see Sellers leave but he wanted first team football – the same as Fox and Hottiger who did well for us and then found the club had moved on and they couldn’t get in the first team.”

The move almost backfired when Beardsley was injured in the last pre-season friendly at Liverpool but an apparent panic buy in Millwall’s Malcolm Allen returned an admirable 7 goals in 12 league and cup starts before Pedro’s return and the start of ‘The Entertainers’.

of “Scores a hat-trick on the telly.” It was obvious he had a place in the hearts of the supporters indefinitely. At Wolves, Kelly would contribute 26 goals in 2 years but despite reaching the FA Cup Quarter Finals

Sadly for Kelly, he would remain on the 9 goals

Kelly himself was spotted amongst the United faithful in the first away PL game at Coventry. In a 1-2 defeat, Kelly was given numerous renditions

in both years, they would fail to gain promotion to the top flight. Kelly’s form had ensured a recall to the Eire side where in February 1995 he would score the goal that sparked an alleged premeditated riot from Combat 18 members that saw the game abandoned and Kelly’s goal annulled. “It’s a lovely memory in www.true-faith.co.uk

scored in the 26 caps he would eventually gain. Kelly’s days at Wolves were numbered due to the recent signing of Sunderland’s Don Goodman and almost 4 years after initially attempting to sign him, the £900,000 The Mackems would spend on Kelly would be the largest transfer fee of his career. However injury meant ‘Ned’ would tf 29