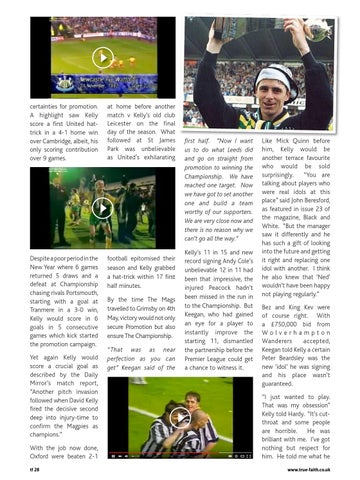 certainties for promotion. A highlight saw Kelly score a first United hattrick in a 4-1 home win over Cambridge, albeit, his only scoring contribution over 9 games.

Despite a poor period in the New Year where 6 games returned 5 draws and a defeat at Championship chasing rivals Portsmouth, starting with a goal at Tranmere in a 3-0 win, Kelly would score in 6 goals in 5 consecutive games which kick started the promotion campaign. Yet again Kelly would score a crucial goal as described by the Daily Mirror’s match report, “Another pitch invasion followed when David Kelly fired the decisive second deep into injury-time to confirm the Magpies as champions.” With the job now done, Oxford were beaten 2-1 tf www.true-faith.co.uk 28

at home before another match v Kelly’s old club Leicester on the final day of the season. What followed at St James Park was unbelievable as United’s exhilarating

football epitomised their season and Kelly grabbed a hat-trick within 17 first half minutes. By the time The Mags travelled to Grimsby on 4th May, victory would not only secure Promotion but also ensure The Championship. “That was as near perfection as you can get” Keegan said of the

first half. “Now I want us to do what Leeds did and go on straight from promotion to winning the Championship. We have reached one target. Now we have got to set another one and build a team worthy of our supporters. We are very close now and there is no reason why we can’t go all the way.” Kelly’s 11 in 15 and new record signing Andy Cole’s unbelievable 12 in 11 had been that impressive, the injured Peacock hadn’t been missed in the run in to the Championship. But Keegan, who had gained an eye for a player to instantly improve the starting 11, dismantled the partnership before the Premier League could get a chance to witness it.

Like Mick Quinn before him, Kelly would be another terrace favourite who would be sold surprisingly. “You are talking about players who were real idols at this place” said John Beresford, as featured in issue 23 of the magazine, Black and White. “But the manager saw it differently and he has such a gift of looking into the future and getting it right and replacing one idol with another. I think he also knew that ‘Ned’ wouldn’t have been happy not playing regularly.” Bez and King Kev were of course right. With a £750,000 bid from Wolverhampton Wanderers accepted, Keegan told Kelly a certain Peter Beardsley was the new ‘idol’ he was signing and his place wasn’t guaranteed. “I just wanted to play. That was my obsession” Kelly told Hardy. “It’s cutthroat and some people are horrible. He was brilliant with me. I’ve got nothing but respect for him. He told me what he www.true-faith.co.uk