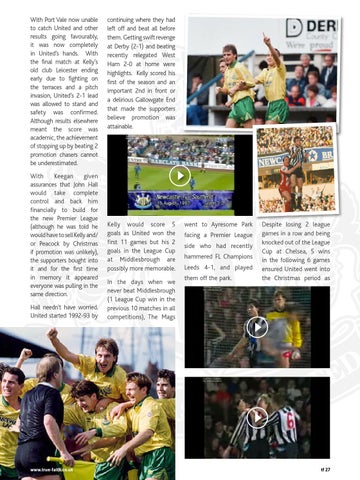 With Port Vale now unable to catch United and other results going favourably, it was now completely in United’s hands. With the final match at Kelly’s old club Leicester ending early due to fighting on the terraces and a pitch invasion, United’s 2-1 lead was allowed to stand and safety was confirmed. Although results elsewhere meant the score was academic, the achievement of stopping up by beating 2 promotion chasers cannot be underestimated. With Keegan given assurances that John Hall would take complete control and back him financially to build for the new Premier League (although he was told he would have to sell Kelly and/ or Peacock by Christmas if promotion was unlikely), the supporters bought into it and for the first time in memory it appeared everyone was pulling in the same direction. Hall needn’t have worried. United started 1992-93 by

continuing where they had left off and beat all before them. Getting swift revenge at Derby (2-1) and beating recently relegated West Ham 2-0 at home were highlights. Kelly scored his first of the season and an important 2nd in front or a delirious Gallowgate End that made the supporters believe promotion was attainable.

Kelly would score 5 goals as United won the first 11 games but his 2 goals in the League Cup at Middlesbrough are possibly more memorable. In the days when we never beat Middlesbrough (1 League Cup win in the previous 10 matches in all competitions), The Mags

went to Ayresome Park facing a Premier League side who had recently hammered FL Champions Leeds 4-1, and played them off the park.

Despite losing 2 league games in a row and being knocked out of the League Cup at Chelsea, 5 wins in the following 6 games ensured United went into the Christmas period as