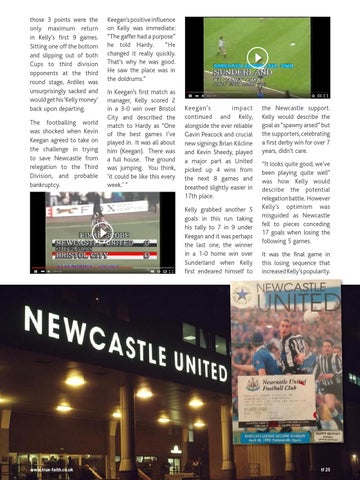 those 3 points were the only maximum return in Kelly’s first 9 games. Sitting one off the bottom and slipping out of both Cups to third division opponents at the third round stage, Ardiles was unsurprisingly sacked and would get his ‘Kelly money’ back upon departing. The footballing world was shocked when Kevin Keegan agreed to take on the challenge in trying to save Newcastle from relegation to the Third Division, and probable bankruptcy.

Keegan’s positive influence on Kelly was immediate: “The gaffer had a purpose” he told Hardy. “He changed it really quickly. That’s why he was good. He saw the place was in the doldrums.” In Keegan’s first match as manager, Kelly scored 2 in a 3-0 win over Bristol City and described the match to Hardy as “One of the best games I’ve played in. It was all about him (Keegan). There was a full house. The ground was jumping. You think, ‘it could be like this every week.’ ”

Keegan’s impact continued and Kelly, alongside the ever reliable Gavin Peacock and crucial new signings Brian Kilcline and Kevin Sheedy, played a major part as United picked up 4 wins from the next 8 games and breathed slightly easier in 17th place. Kelly grabbed another 5 goals in this run taking his tally to 7 in 9 under Keegan and it was perhaps the last one, the winner in a 1-0 home win over Sunderland when Kelly first endeared himself to

the Newcastle support. Kelly would describe the goal as “spawny arsed” but the supporters, celebrating a first derby win for over 7 years, didn’t care. “It looks quite good, we’ve been playing quite well” was how Kelly would describe the potential relegation battle. However Kelly’s optimism was misguided as Newcastle fell to pieces conceding 17 goals when losing the following 5 games. It was the final game in this losing sequence that increased Kelly’s popularity.