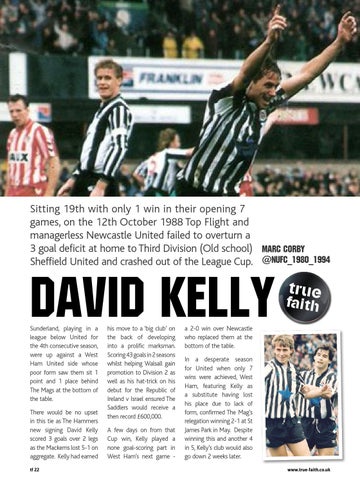 Sitting 19th with only 1 win in their opening 7 games, on the 12th October 1988 Top Flight and managerless Newcastle United failed to overturn a 3 goal deficit at home to Third Division (Old school) Marc Corby Sheffield United and crashed out of the League Cup. @NUFC_1980_1994

DAVID KELLY Sunderland, playing in a league below United for the 4th consecutive season, were up against a West Ham United side whose poor form saw them sit 1 point and 1 place behind The Mags at the bottom of the table. There would be no upset in this tie as The Hammers new signing David Kelly scored 3 goals over 2 legs as the Mackems lost 5-1 on aggregate. Kelly had earned tf www.true-faith.co.uk 22

his move to a ‘big club’ on the back of developing into a prolific marksman. Scoring 43 goals in 2 seasons whilst helping Walsall gain promotion to Division 2 as well as his hat-trick on his debut for the Republic of Ireland v Israel ensured The Saddlers would receive a then record £600,000. A few days on from that Cup win, Kelly played a none goal-scoring part in West Ham’s next game -

a 2-0 win over Newcastle who replaced them at the bottom of the table. In a desperate season for United when only 7 wins were achieved, West Ham, featuring Kelly as a substitute having lost his place due to lack of form, confirmed The Mag’s relegation winning 2-1 at St James Park in May. Despite winning this and another 4 in 5, Kelly’s club would also go down 2 weeks later.