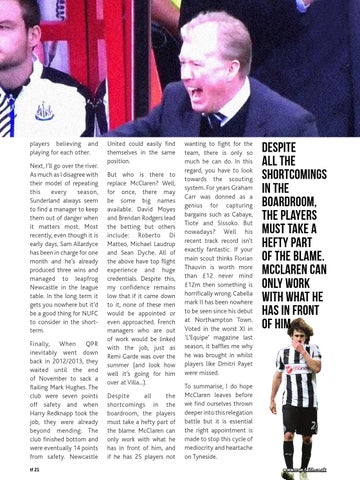 players believing and playing for each other. Next, I’ll go over the river. As much as I disagree with their model of repeating this every season, Sunderland always seem to find a manager to keep them out of danger when it matters most. Most recently, even though it is early days, Sam Allardyce has been in charge for one month and he’s already produced three wins and managed to leapfrog Newcastle in the league table. In the long term it gets you nowhere but it’d be a good thing for NUFC to consider in the shortterm. Finally, When QPR inevitably went down back in 2012/2013, they waited until the end of November to sack a flailing Mark Hughes. The club were seven points off safety and when Harry Redknapp took the job, they were already beyond mending. The club finished bottom and were eventually 14 points from safety. Newcastle tf 21

United could easily find themselves in the same position. But who is there to replace McClaren? Well, for once, there may be some big names available. David Moyes and Brendan Rodgers lead the betting but others include: Roberto Di Matteo, Michael Laudrup and Sean Dyche. All of the above have top flight experience and huge credentials. Despite this, my confidence remains low that if it came down to it, none of these men would be appointed or even approached. French managers who are out of work would be linked with the job, just as Remi Garde was over the summer (and look how well it’s going for him over at Villa...). Despite all the shortcomings in the boardroom, the players must take a hefty part of the blame. McClaren can only work with what he has in front of him, and if he has 25 players not

wanting to fight for the team, there is only so much he can do. In this regard, you have to look towards the scouting system. For years Graham Carr was donned as a genius for capturing bargains such as Cabaye, Tiote and Sissoko. But nowadays? Well his recent track record isn’t exactly fantastic. If your main scout thinks Florian Thauvin is worth more than £12 never mind £12m then something is horrifically wrong. Cabella mark II has been nowhere to be seen since his debut at Northampton Town. Voted in the worst XI in ‘L’Equipe’ magazine last season, it baffles me why he was brought in whilst players like Dmitri Payet were missed.

Despite all the shortcomings in the boardroom, the players must take a hefty part of the blame. McClaren can only work with what he has in front of him

To summarise, I do hope McClaren leaves before we find ourselves thrown deeper into this relegation battle but it is essential the right appointment is made to stop this cycle of mediocrity and heartache on Tyneside. www.true-faith.co.uk