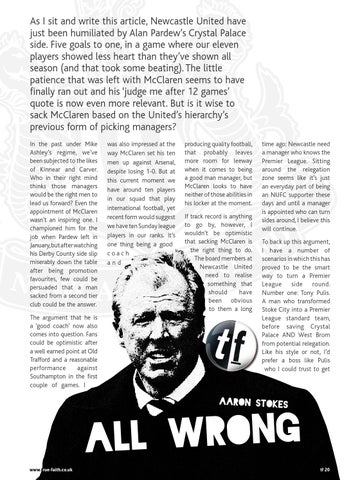 As I sit and write this article, Newcastle United have just been humiliated by Alan Pardew’s Crystal Palace side. Five goals to one, in a game where our eleven players showed less heart than they’ve shown all season (and that took some beating). The little patience that was left with McClaren seems to have finally ran out and his ‘judge me after 12 games’ quote is now even more relevant. But is it wise to sack McClaren based on the United’s hierarchy’s previous form of picking managers? In the past under Mike Ashley’s regime, we’ve been subjected to the likes of Kinnear and Carver. Who in their right mind thinks those managers would be the right men to lead us forward? Even the appointment of McClaren wasn’t an inspiring one. I championed him for the job when Pardew left in January, but after watching his Derby County side slip miserably down the table after being promotion favourites, few could be persuaded that a man sacked from a second tier club could be the answer. The argument that he is a ‘good coach’ now also comes into question. Fans could be optimistic after a well earned point at Old Trafford and a reasonable performance against Southampton in the first couple of games. I

was also impressed at the way McClaren set his ten men up against Arsenal, despite losing 1-0. But at this current moment we have around ten players in our squad that play international football, yet recent form would suggest we have ten Sunday league players in our ranks. It’s one thing being a good coach and

producing quality football, that probably leaves more room for leeway when it comes to being a good man manager, but McClaren looks to have neither of those abilities in his locker at the moment. If track record is anything to go by, however, I wouldn’t be optimistic that sacking McClaren is the right thing to do. The board members at Newcastle United need to realise something that should have been obvious to them a long

time ago: Newcastle need a manager who knows the Premier League. Sitting around the relegation zone seems like it’s just an everyday part of being an NUFC supporter these days and until a manager is appointed who can turn sides around, I believe this will continue. To back up this argument, I have a number of scenarios in which this has proved to be the smart way to turn a Premier League side round. Number one: Tony Pulis. A man who transformed Stoke City into a Premier League standard team, before saving Crystal Palace AND West Brom from potential relegation. Like his style or not, I’d prefer a boss like Pulis who I could trust to get