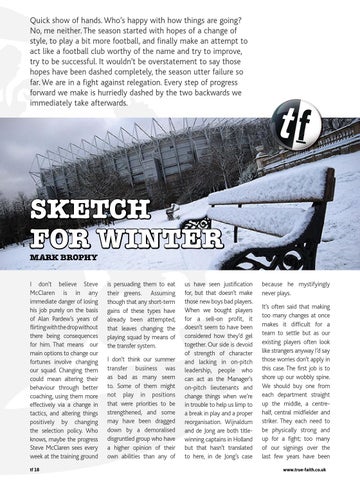 Quick show of hands. Who’s happy with how things are going? No, me neither. The season started with hopes of a change of style, to play a bit more football, and finally make an attempt to act like a football club worthy of the name and try to improve, try to be successful. It wouldn’t be overstatement to say those hopes have been dashed completely, the season utter failure so far. We are in a fight against relegation. Every step of progress forward we make is hurriedly dashed by the two backwards we immediately take afterwards.

I don’t believe Steve McClaren is in any immediate danger of losing his job purely on the basis of Alan Pardew’s years of flirting with the drop without there being consequences for him. That means our main options to change our fortunes involve changing our squad. Changing them could mean altering their behaviour through better coaching, using them more effectively via a change in tactics, and altering things positively by changing the selection policy. Who knows, maybe the progress Steve McClaren sees every week at the training ground tf 18

is persuading them to eat their greens. Assuming though that any short-term gains of these types have already been attempted, that leaves changing the playing squad by means of the transfer system. I don’t think our summer transfer business was as bad as many seem to. Some of them might not play in positions that were priorities to be strengthened, and some may have been dragged down by a demoralised disgruntled group who have a higher opinion of their own abilities than any of

us have seen justification for, but that doesn’t make those new boys bad players. When we bought players for a sell-on profit, it doesn’t seem to have been considered how they’d gel together. Our side is devoid of strength of character and lacking in on-pitch leadership, people who can act as the Manager’s on-pitch lieutenants and change things when we’re in trouble to help us limp to a break in play and a proper reorganisation. Wijnaldum and de Jong are both titlewinning captains in Holland but that hasn’t translated to here, in de Jong’s case

because he mystifyingly never plays. It’s often said that making too many changes at once makes it difficult for a team to settle but as our existing players often look like strangers anyway I’d say those worries don’t apply in this case. The first job is to shore up our wobbly spine. We should buy one from each department straight up the middle, a centrehalf, central midfielder and striker. They each need to be physically strong and up for a fight; too many of our signings over the last few years have been www.true-faith.co.uk