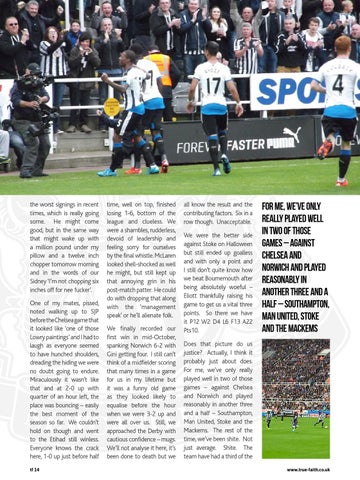 the worst signings in recent times, which is really going some. He might come good, but in the same way that might wake up with a million pound under my pillow and a twelve inch chopper tomorrow morning and in the words of our Sidney ‘I’m not chopping six inches off for nee fucker’. One of my mates, pissed, noted walking up to SJP before the Chelsea game that it looked like ‘one of those Lowry paintings’ and I had to laugh as everyone seemed to have hunched shoulders, dreading the hiding we were no doubt going to endure. Miraculously it wasn’t like that and at 2-0 up with quarter of an hour left, the place was bouncing – easily the best moment of the season so far. We couldn’t hold on though and went to the Etihad still winless. Everyone knows the crack here, 1-0 up just before half tf 14

time, well on top, finished losing 1-6, bottom of the league and clueless. We were a shambles, rudderless, devoid of leadership and feeling sorry for ourselves by the final whistle. McLaren looked shell-shocked as well he might, but still kept up that annoying grin in his post-match patter. He could do with dropping that along with the ‘management speak’ or he’ll alienate folk. We finally recorded our first win in mid-October, spanking Norwich 6-2 with Gini getting four. I still can’t think of a midfielder scoring that many times in a game for us in my lifetime but it was a funny old game as they looked likely to equalise before the hour when we were 3-2 up and were all over us. Still, we approached the Derby with cautious confidence – mugs. We’ll not analyse it here, it’s been done to death but we

all know the result and the contributing factors. Six in a row though. Unacceptable. We were the better side against Stoke on Halloween but still ended up goalless and with only a point and I still don’t quite know how we beat Bournemouth after being absolutely woeful – Eliott thankfully raising his game to get us a vital three points. So there we have it P12 W2 D4 L6 F13 A22 Pts10.

For me, we’ve only really played well in two of those games – against Chelsea and Norwich and played reasonably in another three and a half – Southampton, Man United, Stoke and the Mackems

Does that picture do us justice? Actually, I think it probably just about does. For me, we’ve only really played well in two of those games – against Chelsea and Norwich and played reasonably in another three and a half – Southampton, Man United, Stoke and the Mackems. The rest of the time, we’ve been shite. Not just average. Shite. The team have had a third of the www.true-faith.co.uk