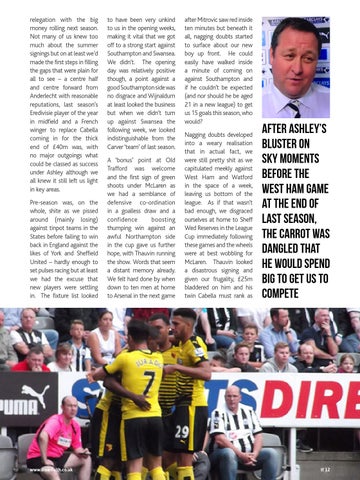 relegation with the big money rolling next season. Not many of us knew too much about the summer signings but on at least we’d made the first steps in filling the gaps that were plain for all to see – a centre half and centre forward from Anderlecht with reasonable reputations, last season’s Eredivisie player of the year in midfield and a French winger to replace Cabella coming in for the thick end of £40m was, with no major outgoings what could be classed as success under Ashley although we all knew it still left us light in key areas. Pre-season was, on the whole, shite as we pissed around (mainly losing) against tinpot teams in the States before failing to win back in England against the likes of York and Sheffield United – hardly enough to set pulses racing but at least we had the excuse that new players were settling in. The fixture list looked

to have been very unkind to us in the opening weeks, making it vital that we got off to a strong start against Southampton and Swansea. We didn’t. The opening day was relatively positive though, a point against a good Southampton side was no disgrace and Wijnaldum at least looked the business but when we didn’t turn up against Swansea the following week, we looked indistinguishable from the Carver ‘team’ of last season. A ‘bonus’ point at Old Trafford was welcome and the first sign of green shoots under McLaren as we had a semblance of defensive co-ordination in a goalless draw and a confidence boosting thumping win against an awful Northampton side in the cup gave us further hope, with Thauvin running the show. Words that seem a distant memory already. We felt hard done by when down to ten men at home to Arsenal in the next game

after Mitrovic saw red inside ten minutes but beneath it all, nagging doubts started to surface about our new boy up front. He could easily have walked inside a minute of coming on against Southampton and if he couldn’t be expected (and nor should he be aged 21 in a new league) to get us 15 goals this season, who would? Nagging doubts developed into a weary realisation that in actual fact, we were still pretty shit as we capitulated meekly against West Ham and Watford in the space of a week, leaving us bottom of the league. As if that wasn’t bad enough, we disgraced ourselves at home to Sheff Wed Reserves in the League Cup immediately following these games and the wheels were at best wobbling for McLaren. Thauvin looked a disastrous signing and given our frugality, £25m bladdered on him and his twin Cabella must rank as

After Ashley’s bluster on Sky moments before the West Ham game at the end of last season, the carrot was dangled that he would spend big to get us to compete