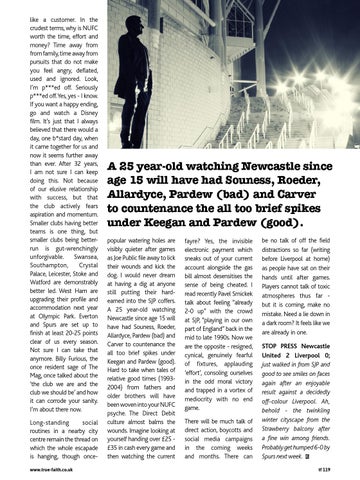 like a customer. In the crudest terms, why is NUFC worth the time, effort and money? Time away from from family, time away from pursuits that do not make you feel angry, deflated, used and ignored. Look, I’m p***ed off. Seriously p***ed off. Yes, yes - I know. If you want a happy ending, go and watch a Disney film. It’s just that I always believed that there would a day, one b*stard day, when it came together for us and now it seems further away than ever. After 32 years, I am not sure I can keep doing this. Not because of our elusive relationship with success, but that the club actively fears aspiration and momentum. Smaller clubs having better teams is one thing, but smaller clubs being betterrun is gut-wrenchingly unforgivable. Swansea, Southampton, Crystal Palace, Leicester, Stoke and Watford are demonstrably better led. West Ham are upgrading their profile and accommodation next year at Olympic Park. Everton and Spurs are set up to finish at least 20-25 points clear of us every season. Not sure I can take that anymore. Billy Furious, the once resident sage of The Mag, once talked about the ‘the club we are and the club we should be’ and how it can corrode your sanity. I’m about there now. Long-standing social routines in a nearby city centre remain the thread on which the whole escapade is hanging, though oncewww.true-faith.co.uk

fayre? Yes, the invisible electronic payment which sneaks out of your current account alongside the gas bill almost desensitises the sense of being cheated. I read recently Pavel Srnickek talk about feeling “already 2-0 up” with the crowd at SJP, “playing in our own part of England” back in the mid to late 1990s. Now we are the opposite - resigned, cynical, genuinely fearful of fixtures, applauding ‘effort’, consoling ourselves in the odd moral victory and trapped in a vortex of mediocrity with no end game. There will be much talk of direct action, boycotts and social media campaigns in the coming weeks and months. There can

be no talk of off the field distractions so far (writing before Liverpool at home) as people have sat on their hands until after games. Players cannot talk of toxic atmospheres thus far but it is coming, make no mistake. Need a lie down in a dark room? It feels like we are already in one. STOP PRESS Newcastle United 2 Liverpool 0; just walked in from SJP and good to see smiles on faces again after an enjoyable result against a decidedly off-colour Liverpool. Ah, behold - the twinkling winter cityscape from the Strawberry balcony after a fine win among friends. Probably get humped 6-0 by Spurs next week. tf 119