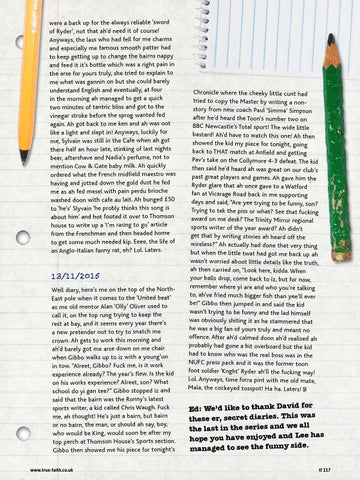 were a back up for the always reliable ‘sword of Ryder’, not that ah’d need it of course! Anyways, the lass who had fell for me charms and especially me famous smooth patter had to keep getting up to change the bairns nappy and feed it it’s bottle which was a right pain in the arse for yours truly, she tried to explain to me what was gannin on but she could barely understand English and eventually, at four in the morning ah managed to get a quick two minutes of tantric bliss and got to the vinegar stroke before the sprog wanted fed again. Ah got back to me ken and ah was oot like a light and slept in! Anyways, luckily for me, Sylvain was still in the Cafe when ah got there half an hour late, stinking of last nights beer, aftershave and Nadia’s perfume, not to mention Cow &amp; Gate baby milk. Ah quickly ordered what the French midfield maestro was having and jotted down the gold dust he fed me as ah fed mesel with pain perdu brioche washed doon with cafe au lait. Ah bunged £50 to ‘he’s’ Slyvain ‘he probly thinks this song is about him’ and hot footed it over to Thomson house to write up a ‘I’m raring to go’ article from the Frenchman and then headed home to get some much needed kip. Eeee, the life of an Anglo-Italian fanny rat, eh? Lol. Laters.

13/11/2015 Well diary, here’s me on the top of the NorthEast pole when it comes to the ‘United beat’ as me old mentor Alan ‘Olly’ Oliver used to call it, on the top rung trying to keep the rest at bay, and it seems every year there’s a new pretender out to try to snatch me crown. Ah gets to work this morning and ah’d barely got me arse down on me chair when Gibbo walks up to iz with a young’un in tow. “Alreet, Gibbo? Fuck me, is it work experience already? The year’s flew. Is the kid on his works experience? Alreet, son? What school do yi gan tee?” Gibbo stopped iz and said that the bairn was the Ronny’s latest sports writer, a kid called Chris Waugh. Fuck me, ah thought! He’s just a bairn, but bairn or no bairn, the man, or should ah say, boy, who would be King, would soon be after my top perch at Thomson House’s Sports section. Gibbo then showed me his piece for tonight’s www.true-faith.co.uk

Chronicle where the cheeky little cunt had tried to copy the Master by writing a nonstory from new coach Paul ‘Simma’ Simpson after he’d heard the Toon’s number two on BBC Newcastle’s Total sport! The wide little bastard! Ah’d have to watch this one! Ah then showed the kid my piece for tonight, going back to THAT match at Anfield and getting Pav’s take on the Collymore 4-3 defeat. The kid then said he’d heard ah was great on our club’s past great players and games. Ah gave him the Ryder glare that ah once gave to a Watford fan at Vicarage Road back in me supporting days and said, “Are yee trying to be funny, son? Trying to tek the piss or what? See that fucking award on me desk? The Trinity Mirror regional sports writer of the year award? Ah didn’t get that by writing stories ah heard off the wireless?” Ah actually had done that very thing but when the little twat had got me back up ah wasn’t worried aboot little details like the truth, ah then carried on, “Look here, kidda. When your balls drop, come back to iz, but for now, remember where yi are and who you’re talking to, ah’ve fried much bigger fish than yee’ll ever be!” Gibbo then jumped in and said the kid wasn’t trying to be funny and the lad himself was obviously shiting it as he stammered that he was a big fan of yours truly and meant no offence. After ah’d calmed doon ah’d realised ah probably had gone a bit overboard but the kid had to know who was the real boss was in the NUFC press pack and it was the former toon foot soldier ‘Knght’ Ryder ah’ll the fucking way! Lol. Anyways, time forra pint with me old mate, Mala, the cockeyed tosspot! Ha ha. Laters!

for Ed: We’d like to thank David was these er, secret diaries. This l the last in the series and we al e has hope you have enjoyed and Le . managed to see the funny side tf 117