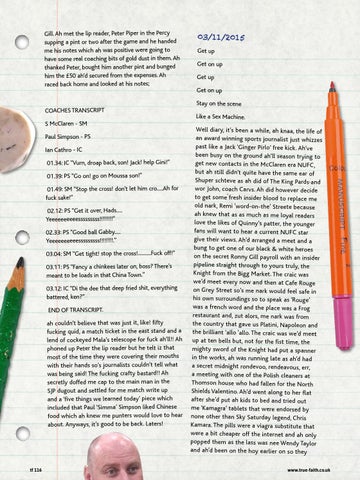 Gill. Ah met the lip reader, Peter Piper in the Percy supping a pint or two after the game and he handed me his notes which ah was positive were going to have some real coaching bits of gold dust in them. Ah thanked Peter, bought him another pint and bunged him the £50 ah’d secured from the expenses. Ah raced back home and looked at his notes;

COACHES TRANSCRIPT S McClaren - SM Paul Simpson - PS Ian Cathro - IC 01.34: IC “Vurn, droap back, son! Jack! help Gini!” 01.39: PS “Go on! go on Moussa son!” 01.49: SM “Stop the cross! don’t let him cro.....Ah for fuck sake!” 02.12: PS “Get it over, Hads..... Yeeeeeeeeeesssssssss!!!!!!!!” 02.33: PS “Good ball Gabby..... Yeeeeeeeeeesssssssss!!!!!!!!.” 03.04: SM “Get tight! stop the cross!...........Fuck off!” 03.11: PS “Fancy a chinkees later on, boss? There’s meant to be loads in that China Town.” 03.12: IC “Di the dee that deep fried shit, everything battered, ken?” END OF TRANSCRIPT. ah couldn’t believe that was just it, like! fifty fucking quid, a match ticket in the east stand and a lend of cockeyed Mala’s telescope for fuck ah’ll!! Ah phoned up Peter the lip reader but he telt iz that most of the time they were covering their mouths with their hands so’s journalists couldn’t tell what was being said! The fucking crafty bastard!! Ah secretly doffed me cap to the main man in the SJP dugout and settled for me match write up and a ‘five things we learned today’ piece which included that Paul ‘Simma’ Simpson liked Chinese food which ah knew me punters would love to hear about. Anyways, it’s good to be back. Laters!

03/11/2015 Get up Get on up Get up Get on up Stay on the scene Like a Sex Machine. Well diary, it’s been a while, ah knaa, the life of an award winning sports journalist just whizzes past like a Jack ‘Ginger Pirlo’ free kick. Ah’ve been busy on the ground ah’ll season trying to get new contacts in the McClaren era NUFC , but ah still didn’t quite have the same ear of Shuper schteve as ah did of The King Pards and wor John, coach Carvs. Ah did however decide to get some fresh insider blood to replace me old nark, Remi ‘word-on-the’ Streete because ah knew that as as much as me loyal readers love the likes of Quinny’s patter, the younger fans will want to hear a current NUFC star give their views. Ah’d arranged a meet and a bung to get one of our black &amp; white heroes on the secret Ronny Gill payroll with an insider pipeline straight through to yours truly, the Knight from the Bigg Market. The craic was we’d meet every now and then at Cafe Rouge on Grey Street so’s me nark would feel safe in his own surroundings so to speak as ‘Rouge’ was a french word and the place was a Frog restaurant and, zut alors, me nark was from the country that gave us Platini, Napoleon and the brilliant ‘allo ‘allo. The craic was we’d meet up at ten bells but, not for the fist time, the mighty sword of the Knight had put a spanner in the works, ah was running late as ah’d had a secret midnight rondevoo, rendeavous, err, a meeting with one of the Polish cleaners at Thomson house who had fallen for the North Shields Valentino. Ah’d went along to her flat after she’d put ah kids to bed and tried out me ‘Kamagra’ tablets that were endorsed by none other than Sky Saturday legend, Chris Kamara. The pills were a viagra substitute that were a bit cheaper off the internet and ah only popped them as the lass was nee Wendy Taylor and ah’d been on the hoy earlier on so they www.true-faith.co.uk