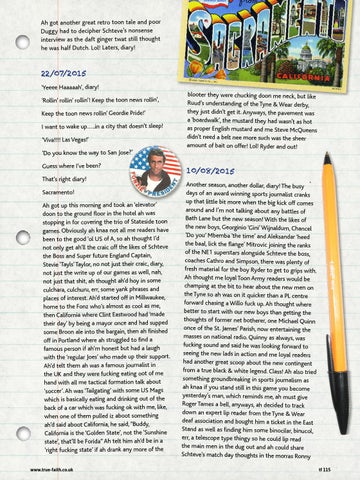 Ah got another great retro toon tale and poor Duggy had to decipher Schteve’s nonsense interview as the daft ginger twat still thought he was half Dutch. Lol! Laters, diary!

22/07/2015 ‘Yeeee Haaaaah’, diary! ‘Rollin’ rollin’ rollin’! Keep the toon news rollin’, Keep the toon news rollin’ Geordie Pride!’ I want to wake up…..in a city that doesn’t sleep! ‘Viva!!!! Las Vegas!’ ‘Do you know the way to San Jose?’ Guess where I’ve been? That’s right diary! Sacramento! Ah got up this morning and took an ‘elevator’ doon to the ground floor in the hotel ah was stopping in for covering the trio of Stateside toon games. Obviously ah knaa not all me readers have been to the good ‘ol US of A, so ah thought I’d not only get ah’ll the craic off the likes of Schteve the Boss and Super future England Captain, Stevie ‘Tayls’ Taylor, no not just their craic, diary, not just the write up of our games as well, nah, not just that shit, ah thought ah’d hoy in some culchara, culchuru, err, some yank phrases and places of interest. Ah’d started off in Millwaukee, home to the Fonz who’s almost as cool as me, then California where Clint Eastwood had ‘made their day’ by being a mayor once and had supped some Broon ale into the bargain, then ah finished off in Portland where ah struggled to find a famous person if ah’m honest but had a laugh with the ‘regular Joes’ who made up their support. Ah’d telt them ah was a famous journalist in the UK and they were fucking eating oot of me hand with all me tactical formation talk about ‘soccer’. Ah was ‘Tailgating’ with some US Mags which is basically eating and drinking out of the back of a car which was fucking ok with me, like, when one of them pulled iz aboot something ah’d said aboot California, he said, “Buddy, California is the ‘Golden State’, not the ‘Sunshine state’, that’ll be Forida” Ah telt him ah’d be in a ‘right fucking state’ if ah drank any more of the www.true-faith.co.uk

blooter they were chucking doon me neck, but like Ruud’s understanding of the Tyne &amp; Wear derby, they just didn’t get it. Anyways, the pavement was a ‘boardwalk’, the mustard they had wasn’t as hot as proper English mustard and me Steve McQueens didn’t need a belt nee more such was the sheer amount of bait on offer! Lol! Ryder and out!

10/08/2015 Another season, another dollar, diary! The busy days of an award winning sports journalist cranks up that little bit more when the big kick off comes around and I’m not talking about any battles of Bath Lane but the new season! With the likes of the new boys, Georginio ‘Gini’ Wijnaldum, Chancel ‘Do you’ Mbemba ‘the time’ and Aleksandar ‘heed the baal, lick the flange’ Mitrovic joining the ranks of the NE1 superstars alongside Schteve the boss, coaches Cathro and Simpson, there was plenty of fresh material for the boy Ryder to get to grips with. Ah thought me loyal Toon Army readers would be champing at the bit to hear about the new men on the Tyne so ah was on it quicker than a PL centre forward chasing a Willo fuck up. Ah thought where better to start with our new boys than getting the thoughts of former net botherer, one Michael Quinn once of the St. James’ Parish, now entertaining the masses on national radio. Quinny as always, was fucking sound and said he was looking forward to seeing the new lads in action and me loyal readers had another great scoop about the new contingent from a true black &amp; white legend. Class! Ah also tried something groundbreaking in sports journalism as ah knaa if you stand still in this game you become yesterday’s man, which reminds me, ah must give Roger Tames a bell, anyways, ah decided to track down an expert lip reader from the Tyne &amp; Wear deaf association and bought him a ticket in the East Stand as well as finding him some binocilar, binucol, err, a telescope type thingy so he could lip read the main men in the dug out and ah could share Schteve’s match day thoughts in the morras Ronny tf 115