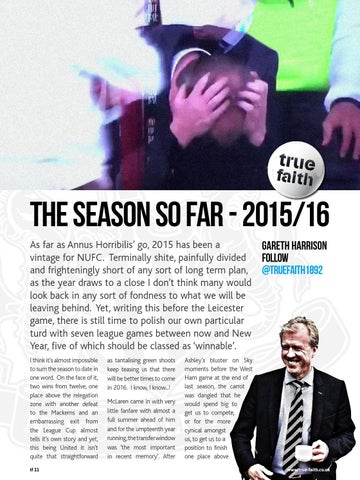 THE SEASON SO FAR - 2015/16 As far as Annus Horribilis’ go, 2015 has been a vintage for NUFC. Terminally shite, painfully divided and frighteningly short of any sort of long term plan, as the year draws to a close I don’t think many would look back in any sort of fondness to what we will be leaving behind. Yet, writing this before the Leicester game, there is still time to polish our own particular turd with seven league games between now and New Year, five of which should be classed as ‘winnable’. I think it’s almost impossible to sum the season to date in one word. On the face of it, two wins from twelve, one place above the relegation zone with another defeat to the Mackems and an embarrassing exit from the League Cup almost tells it’s own story and yet, this being United it isn’t quite that straightforward tf 11

as tantalising green shoots keep teasing us that there will be better times to come in 2016. I know, I know...! McLaren came in with very little fanfare with almost a full summer ahead of him and for the umpteenth year running,the transfer window was ‘the most important in recent memory’. After

Ashley’s bluster on Sky moments before the West Ham game at the end of last season, the carrot was dangled that he would spend big to get us to compete, or for the more cynical amongst us, to get us to a position to finish one place above www.true-faith.co.uk