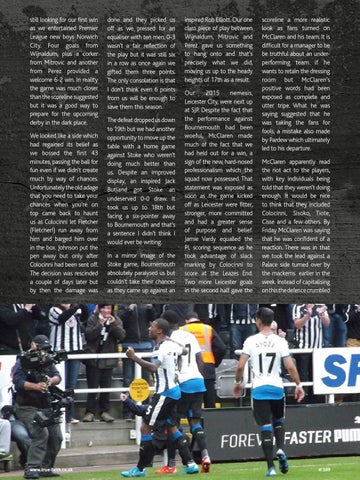 still looking for our first win as we entertained Premier League new boys Norwich City. Four goals from Wijnaldum, plus a corker from Mitrovic and another from Perez provided a welcome 6-2 win. In reality the game was much closer than the scoreline suggested but it was a good way to prepare for the upcoming derby in the dark place. We looked like a side which had regained its belief as we bossed the first 43 minutes, passing the ball for fun even if we didn’t create much by way of chances. Unfortunately the old adage that you need to take your chances when you’re on top came back to haunt us as Colocinni let Fletcher (Fletcher!) run away from him and barged him over in the box. Johnson put the pen away but only after Colocinni had been sent off. The decision was rescinded a couple of days later but by then the damage was

done and they picked us off as we pressed for an equaliser with ten men. 0-3 wasn’t a fair reflection of the play but it was still six in a row as once again we gifted them three points. The only consolation is that I don’t think even 6 points from us will be enough to save them this season. The defeat dropped us down to 19th but we had another opportunity to move up the table with a home game against Stoke who weren’t doing much better than us. Despite an improved display, an inspired Jack Butland got Stoke an undeserved 0-0 draw. It took us up to 18th but facing a six-pointer away to Bournemouth and that’s a sentence I didn’t think I would ever be writing. In a mirror image of the Stoke game, Bournemouth absolutely paralysed us but couldn’t take their chances as they came up against an

inspired Rob Elliott. Our one class piece of play between Wijnaldum, Mitrovic and Perez gave us something to hang onto and that’s precisely what we did, moving us up to the heady heights of 17th as a result. Our 2015 nemesis, Leicester City, were next up at SJP. Despite the fact that the performance against Bournemouth had been woeful, McClaren made much of the fact that we had held out for a win, a sign of the new, hard-nosed professionalism which the squad now possessed. That statement was exposed as soon as the game kicked off as Leicester were fitter, stronger, more committed and had a greater sense of purpose and belief. Jamie Vardy equalled the PL scoring sequence as he took advantage of slack marking by Colocinni to score at the Leazes End. Two more Leicester goals in the second half gave the

scoreline a more realistic look as fans turned on McClaren and his team. It is difficult for a manager to be be truthful about an underperforming team if he wants to retain the dressing room but McClaren’s positive words had been exposed as complete and utter tripe. What he was saying suggested that he was taking the fans for fools, a mistake also made by Pardew which ultimately led to his departure. McClaren apparently read the riot act to the players, with key individuals being told that they weren’t doing enough. It would be nice to think that they included Colocinni, Sisoko, Tiote, Cisse and a few others. By Friday McClaren was saying that he was confident of a reaction. There was in that we took the lead against a Palace side turned over by the mackems earlier in the week. Instead of capitalising on this the defence crumbled