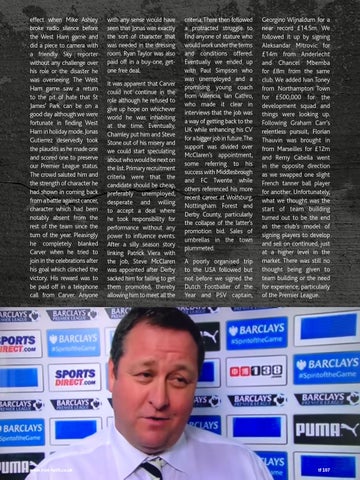 effect when Mike Ashley broke radio silence before the West Ham game and did a piece to camera with a friendly Sky reporter without any challenge over his role or the disaster he was overseeing. The West Ham game saw a return to the pit of hate that St James’ Park can be on a good day although we were fortunate in finding West Ham in holiday mode. Jonas Gutierrez deservedly took the plaudits as he made one and scored one to preserve our Premier League status. The crowd saluted him and the strength of character he had shown in coming back from a battle against cancer, character which had been notably absent from the rest of the team since the turn of the year. Pleasingly he completely blanked Carver when he tried to join in the celebrations after his goal which clinched the victory. His reward was to be paid off in a telephone call from Carver. Anyone

with any sense would have seen that Jonas was exactly the sort of character that was needed in the dressing room. Ryan Taylor was also paid off in a buy-one, getone free deal. It was apparent that Carver could not continue in the role although he refused to give up hope on whichever world he was inhabiting at the time. Eventually, Charnley put him and Steve Stone out of his misery and we could start speculating about who would be next on the list. Primary recruitment criteria were that the candidate should be cheap, preferably unemployed, desperate and willing to accept a deal where he took responsibility for performance without any power to influence events. After a silly season story linking Patrick Viera with the job, Steve McClaren was appointed after Derby sacked him for failing to get them promoted, thereby allowing him to meet all the

criteria. There then followed a protracted struggle to find anyone of stature who would work under the terms and conditions offered. Eventually we ended up with Paul Simpson who was unemployed and a promising young coach from Valencia, Ian Cathro, who made it clear in interviews that the job was a way of getting back to the UK while enhancing his CV for a bigger job in future.The support was divided over McClaren’s appointment, some referring to his success with Middlesbrough and FC Twente while others referenced his more recent career at Wolfsburg, Nottingham Forest and Derby County, particularly the collapse of the latter’s promotion bid. Sales of umbrellas in the town plummeted. A poorly organised trip to the USA followed but not before we signed the Dutch Footballer of the Year and PSV captain,

Georgino Wijnaldum for a near record £14.5m. We followed it up by signing Aleksandar Mitrovic for £14m from Anderlecht and Chancel Mbemba for £8m from the same club. We added Ivan Toney from Northampton Town for £500,000 for the development squad and things were looking up. Following Graham Carr’s relentless pursuit, Florian Thauvin was brought in from Marseilles for £12m and Remy Cabella went in the opposite direction as we swapped one slight French tanner ball player for another. Unfortunately, what we thought was the start of team building turned out to be the end as the club’s model of signing players to develop and sell on continued, just at a higher level in the market. There was still no thought being given to team building or the need for experience, particularly of the Premier League.