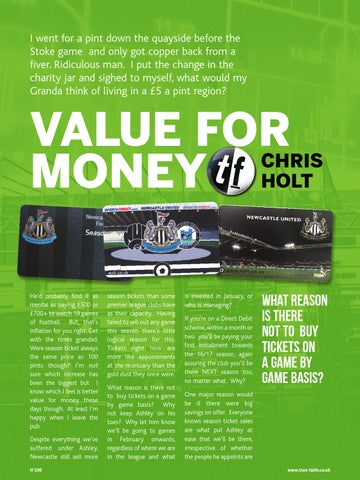 I went for a pint down the quayside before the Stoke game and only got copper back from a fiver. Ridiculous man. I put the change in the charity jar and sighed to myself, what would my Granda think of living in a £5 a pint region?

VALUE FOR CHRIS MONEY HOLT He’d probably find it as mental as paying £500 or £700+ to watch 19 games of football. But, that’s inflation for you right. Get with the times grandad. Were season ticket always the same price as 100 pints though? I’m not sure which increase has been the biggest but I know which I feel is better value for money these days though. At least I’m happy when I leave the pub. Despite everything we’ve suffered under Ashley, Newcastle still sell more tf 100

season tickets than some premier league clubs have as their capacity. Having failed to sell out any game this season there’s little logical reason for this. Tickets right now are more like appointments at the mortuary than the gold dust they once were. What reason is there not to buy tickets on a game by game basis? Why not keep Ashley on his toes? Why let him know we’ll be going to games in February onwards, regardless of where we are in the league and what

is invested in January, or who is managing? If you’re on a Direct Debit scheme, within a month or two you’ll be paying your first installment towards the 16/17 season, again assuring the club you’ll be there NEXT season too, no matter what. Why?

What reason is there not to buy tickets on a game by game basis?

One major reason would be if there were big savings on offer. Everyone knows season ticket sales are what put Ashley at ease that we’ll be there, irrespective of whether the people he appoints are www.true-faith.co.uk