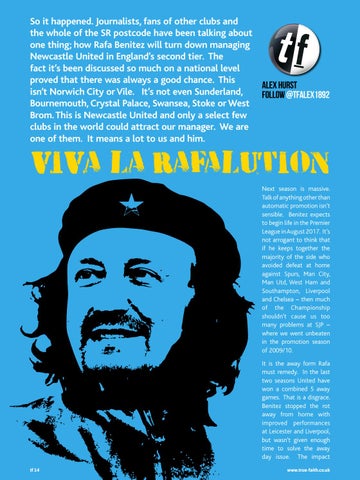 So it happened. Journalists, fans of other clubs and the whole of the SR postcode have been talking about one thing; how Rafa Benitez will turn down managing Newcastle United in England’s second tier. The fact it’s been discussed so much on a national level proved that there was always a good chance. This ALEX HURST isn’t Norwich City or Vile. It’s not even Sunderland, Follow @tfalex1892 Bournemouth, Crystal Palace, Swansea, Stoke or West Brom. This is Newcastle United and only a select few clubs in the world could attract our manager. We are one of them. It means a lot to us and him.

Next season is massive. Talk of anything other than automatic promotion isn’t sensible. Benitez expects to begin life in the Premier League in August 2017. It’s not arrogant to think that if he keeps together the majority of the side who avoided defeat at home against Spurs, Man City, Man Utd, West Ham and Southampton, Liverpool and Chelsea – then much of the Championship shouldn’t cause us too many problems at SJP – where we went unbeaten in the promotion season of 2009/10. It is the away form Rafa must remedy. In the last two seasons United have won a combined 5 away games. That is a disgrace. Benitez stopped the rot away from home with improved performances at Leicester and Liverpool, but wasn’t given enough time to solve the away day issue. The impact tf 14

The latest free issue of Newcastle United's biggest fanzine, true faith is out now. Since the last issue we’ve been relegated but the mood is upbeat and positive, 3 hour queues for season tickets, sold out sections of the ground, and its all down to Rafa! In this issue we look back on last season and forward to the next. Keep On, Keepin’ On ...