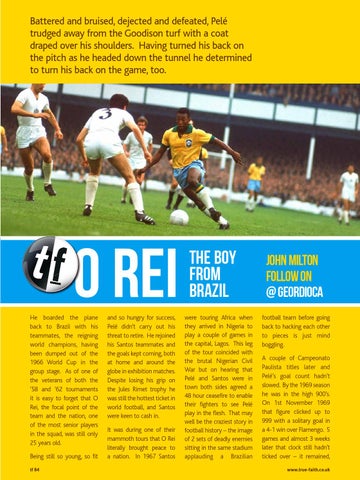 Battered and bruised, dejected and defeated, Pelé trudged away from the Goodison turf with a coat draped over his shoulders. Having turned his back on the pitch as he headed down the tunnel he determined to turn his back on the game, too.

O Rei He boarded the plane back to Brazil with his teammates, the reigning world champions, having been dumped out of the 1966 World Cup in the group stage. As of one of the veterans of both the ’58 and ’62 tournaments it is easy to forget that O Rei, the focal point of the team and the nation, one of the most senior players in the squad, was still only 25 years old. Being still so young, so fit tf 84

and so hungry for success, Pelé didn’t carry out his threat to retire. He rejoined his Santos teammates and the goals kept coming, both at home and around the globe in exhibition matches. Despite losing his grip on the Jules Rimet trophy he was still the hottest ticket in world football, and Santos were keen to cash in. It was during one of their mammoth tours that O Rei literally brought peace to a nation. In 1967 Santos

The boy from brazil were touring Africa when they arrived in Nigeria to play a couple of games in the capital, Lagos. This leg of the tour coincided with the brutal Nigerian Civil War but on hearing that Pelé and Santos were in town both sides agreed a 48 hour ceasefire to enable their fighters to see Pelé play in the flesh. That may well be the craziest story in football history – the image of 2 sets of deadly enemies sitting in the same stadium applauding a Brazilian

JOHN MILTON Follow on @ Geordioca football team before going back to hacking each other to pieces is just mind boggling. A couple of Campeonato Paulista titles later and Pelé’s goal count hadn’t slowed. By the 1969 season he was in the high 900’s. On 1st November 1969 that figure clicked up to 999 with a solitary goal in a 4-1 win over Flamengo. 5 games and almost 3 weeks later that clock still hadn’t ticked over – it remained, www.true-faith.co.uk