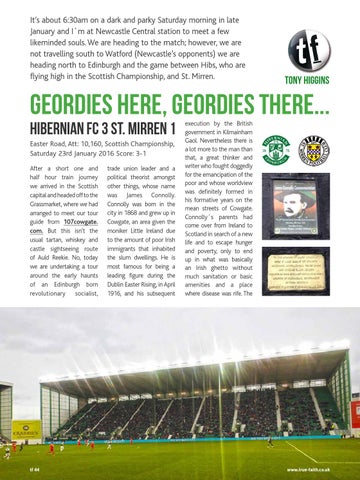 It’s about 6:30am on a dark and parky Saturday morning in late January and I´m at Newcastle Central station to meet a few likeminded souls. We are heading to the match; however, we are not travelling south to Watford (Newcastle’s opponents) we are heading north to Edinburgh and the game between Hibs, who are flying high in the Scottish Championship, and St. Mirren.

GEORDIES HERE, GEORDIES THERE... Hibernian FC 3 St. Mirren 1 Easter Road, Att: 10,160, Scottish Championship, Saturday 23rd January 2016 Score: 3-1 After a short one and half hour train journey we arrived in the Scottish capital and headed off to the Grassmarket, where we had arranged to meet our tour guide from 107cowgate. com. But this isn’t the usual tartan, whiskey and castle sightseeing route of Auld Reekie. No, today we are undertaking a tour around the early haunts of an Edinburgh born revolutionary socialist,

trade union leader and a political theorist amongst other things, whose name was James Connolly. Connolly was born in the city in 1868 and grew up in Cowgate, an area given the moniker Little Ireland due to the amount of poor Irish immigrants that inhabited the slum dwellings. He is most famous for being a leading figure during the Dublin Easter Rising, in April 1916, and his subsequent

execution by the British government in Kilmainham Gaol. Nevertheless there is a lot more to the man than that, a great thinker and writer who fought doggedly for the emancipation of the poor and whose worldview was definitely formed in his formative years on the mean streets of Cowgate. Connolly´s parents had come over from Ireland to Scotland in search of a new life and to escape hunger and poverty, only to end up in what was basically an Irish ghetto without much sanitation or basic amenities and a place where disease was rife. The