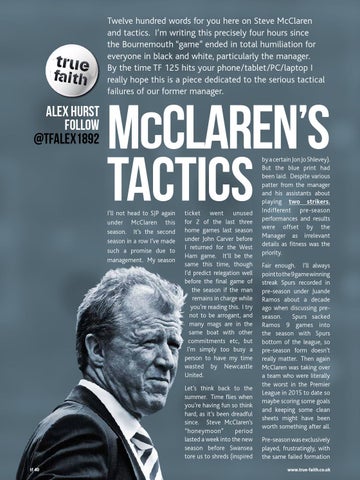 Twelve hundred words for you here on Steve McClaren and tactics. I’m writing this precisely four hours since the Bournemouth “game” ended in total humiliation for everyone in black and white, particularly the manager. By the time TF 125 hits your phone/tablet/PC/laptop I really hope this is a piece dedicated to the serious tactical failures of our former manager.

McCLAREN’S TACTICS I’ll not head to SJP again under McClaren this season. It’s the second season in a row I’ve made such a promise due to management. My season

ticket went unused for 2 of the last three home games last season under John Carver before I returned for the West Ham game. It’ll be the same this time, though I’d predict relegation well before the final game of the season if the man remains in charge while you’re reading this. I try not to be arrogant, and many mags are in the same boat with other commitments etc, but I’m simply too busy a person to have my time wasted by Newcastle United. Let’s think back to the summer. Time flies when you’re having fun so think hard, as it’s been dreadful since. Steve McClaren’s “honeymoon” period lasted a week into the new season before Swansea tore us to shreds (inspired

by a certain Jon Jo Shlevey). But the blue print had been laid. Despite various patter from the manager and his assistants about playing two strikers. Indifferent pre-season performances and results were offset by the Manager as irrelevant details as fitness was the priority. Fair enough. I’ll always point to the 9 game winning streak Spurs recorded in pre-season under Juande Ramos about a decade ago when discussing preseason. Spurs sacked Ramos 9 games into the season with Spurs bottom of the league, so pre-season form doesn’t really matter. Then again McClaren was taking over a team who were literally the worst in the Premier League in 2015 to date so maybe scoring some goals and keeping some clean sheets might have been worth something after all. Pre-season was exclusively played, frustratingly, with the same failed formation www.true-faith.co.uk