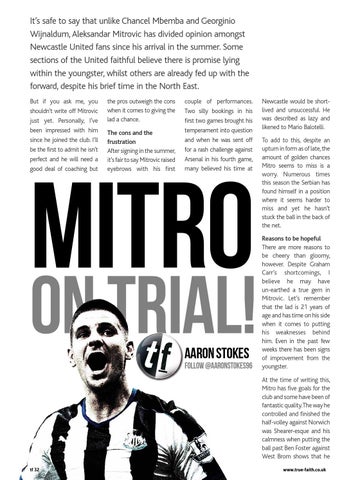 It’s safe to say that unlike Chancel Mbemba and Georginio Wijnaldum, Aleksandar Mitrovic has divided opinion amongst Newcastle United fans since his arrival in the summer. Some sections of the United faithful believe there is promise lying within the youngster, whilst others are already fed up with the forward, despite his brief time in the North East. But if you ask me, you shouldn’t write off Mitrovic just yet. Personally, I’ve been impressed with him since he joined the club. I’ll be the first to admit he isn’t perfect and he will need a good deal of coaching but

the pros outweigh the cons when it comes to giving the lad a chance. The cons and the frustration After signing in the summer, it’s fair to say Mitrovic raised eyebrows with his first

couple of performances. Two silly bookings in his first two games brought his temperament into question and when he was sent off for a rash challenge against Arsenal in his fourth game, many believed his time at

Newcastle would be shortlived and unsuccessful. He was described as lazy and likened to Mario Balotelli. To add to this, despite an upturn in form as of late, the amount of golden chances Mitro seems to miss is a worry. Numerous times this season the Serbian has found himself in a position where it seems harder to miss and yet he hasn’t stuck the ball in the back of the net. Reasons to be hopeful There are more reasons to be cheery than gloomy, however. Despite Graham Carr’s shortcomings, I believe he may have un-earthed a true gem in Mitrovic. Let’s remember that the lad is 21 years of age and has time on his side when it comes to putting his weaknesses behind him. Even in the past few weeks there has been signs of improvement from the youngster.

At the time of writing this, Mitro has five goals for the club and some have been of fantastic quality.The way he controlled and finished the half-volley against Norwich was Shearer-esque and his calmness when putting the ball past Ben Foster against West Brom shows that he tf 32