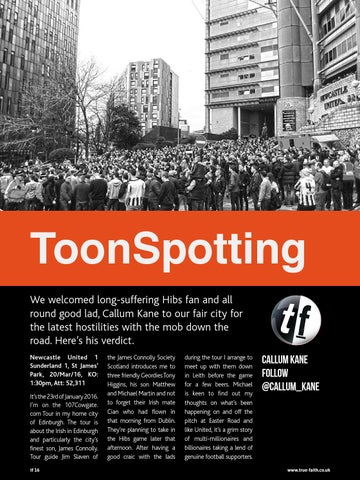 ToonSpotting We welcomed long-suffering Hibs fan and all round good lad, Callum Kane to our fair city for the latest hostilities with the mob down the road. Here’s his verdict. Newcastle United 1 Sunderland 1, St James’ Park, 20/Mar/16, KO: 1:30pm, Att: 52,311 It’s the 23rd of January 2016. I’m on the 107Cowgate. com Tour in my home city of Edinburgh. The tour is about the Irish in Edinburgh and particularly the city’s finest son, James Connolly. Tour guide Jim Slaven of tf 16

the James Connolly Society Scotland introduces me to three friendly Geordies Tony Higgins, his son Matthew and Michael Martin and not to forget their Irish mate Cian who had flown in that morning from Dublin. They’re planning to take in the Hibs game later that afternoon. After having a good craic with the lads

during the tour I arrange to meet up with them down in Leith before the game for a few beers. Michael is keen to find out my thoughts on what’s been happening on and off the pitch at Easter Road and like United, it’s a grim story of multi-millionaires and billionaires taking a lend of genuine football supporters.