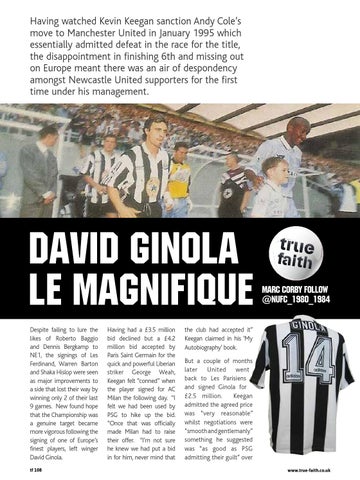 Having watched Kevin Keegan sanction Andy Cole’s move to Manchester United in January 1995 which essentially admitted defeat in the race for the title, the disappointment in finishing 6th and missing out on Europe meant there was an air of despondency amongst Newcastle United supporters for the first time under his management.

Despite failing to lure the likes of Roberto Baggio and Dennis Bergkamp to NE1, the signings of Les Ferdinand, Warren Barton and Shaka Hislop were seen as major improvements to a side that lost their way by winning only 2 of their last 9 games. New found hope that the Championship was a genuine target became more vigorous following the signing of one of Europe’s finest players, left winger David Ginola. tf 108

Having had a £3.5 million bid declined but a £4.2 million bid accepted by Paris Saint Germain for the quick and powerful Liberian striker George Weah, Keegan felt “conned” when the player signed for AC Milan the following day. “I felt we had been used by PSG to hike up the bid. “Once that was officially made Milan had to raise their offer. “I’m not sure he knew we had put a bid in for him, never mind that

the club had accepted it” Keegan claimed in his ‘My Autobiography’ book. But a couple of months later United went back to Les Parisiens and signed Ginola for £2.5 million. Keegan admitted the agreed price was “very reasonable” whilst negotiations were “smooth and gentlemanly” something he suggested was “as good as PSG admitting their guilt” over www.true-faith.co.uk