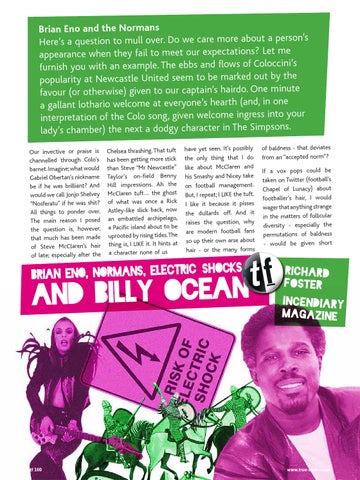 Brian Eno and the Normans Here’s a question to mull over. Do we care more about a person’s appearance when they fail to meet our expectations? Let me furnish you with an example. The ebbs and flows of Coloccini’s popularity at Newcastle United seem to be marked out by the favour (or otherwise) given to our captain’s hairdo. One minute a gallant lothario welcome at everyone’s hearth (and, in one interpretation of the Colo song, given welcome ingress into your lady’s chamber) the next a dodgy character in The Simpsons. Our invective or praise is channelled through Colo’s barnet. Imagine; what would Gabriel Obertan’s nickname be if he was brilliant? And would we call Jonjo Shelvey “Nosferatu” if he was shit? All things to ponder over. The main reason I posed the question is, however, that much has been made of Steve McClaren’s hair of late; especially after the

ly Chelsea thrashing. That tuft have yet seen. It’s possib has been getting more stick the only thing that I do than Steve “Mr Newcastle” like about McClaren and Taylor’s on-field Benny his Smashy and Nicey take Hill impressions. Ah the on football management. McClaren tuft… the ghost But, I repeat; I LIKE the tuft. of what was once a Rick I like it because it pisses Astley-like slick back, now the dullards off. And it an embattled archipelago, raises the question, why a Pacific island about to be are modern football fans uprooted by rising tides. The so up their own arse about thing is, I LIKE it. It hints at hair - or the many forms a character none of us

of baldness - that deviates from an “accepted norm”? If a vox pops could be taken on Twitter (football’s Chapel of Lunacy) about footballer’s hair, I would wager that anything strange in the matters of follicular diversity - especially the permutations of baldness - would be given short