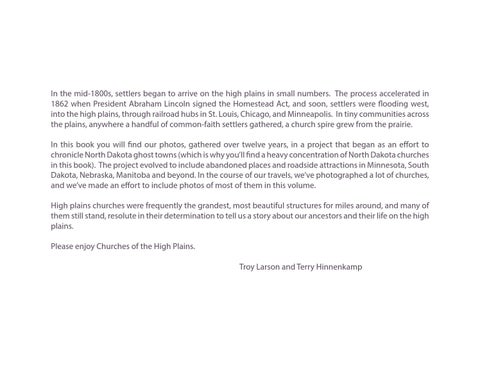 In the mid-1800s, settlers began to arrive on the high plains in small numbers. The process accelerated in 1862 when President Abraham Lincoln signed the Homestead Act, and soon, settlers were flooding west, into the high plains, through railroad hubs in St. Louis, Chicago, and Minneapolis. In tiny communities across the plains, anywhere a handful of common-faith settlers gathered, a church spire grew from the prairie. In this book you will find our photos, gathered over twelve years, in a project that began as an effort to chronicle North Dakota ghost towns (which is why youâ&#x20AC;&#x2122;ll find a heavy concentration of North Dakota churches in this book). The project evolved to include abandoned places and roadside attractions in Minnesota, South Dakota, Nebraska, Manitoba and beyond. In the course of our travels, weâ&#x20AC;&#x2122;ve photographed a lot of churches, and weâ&#x20AC;&#x2122;ve made an effort to include photos of most of them in this volume. High plains churches were frequently the grandest, most beautiful structures for miles around, and many of them still stand, resolute in their determination to tell us a story about our ancestors and their life on the high plains. Please enjoy Churches of the High Plains. Troy Larson and Terry Hinnenkamp

Trotters is a very remote spot in western North Dakota, just miles from the Montana state line, and just outside the border of the Little Missouri National Grasslands, a boundary visible only on maps. On the ground it’s clear, this part of the prairie is nearly pristine. Trees are nearly as scarce as people, and prairie grasses with beautiful blooms of yellow and purple rule the landscape. Francis “Lee” Trotters became the first postmaster of Trotters in 1904, having earned the position by carrying the mail from Wibaux, Montana, 25 miles to the southwest, for an entire year without pay. In 1959, Leonard Hall became the Postmaster. He would be the last person to hold the position, and the last official resident of Trotters. He has since passed away, and the town had been empy for almost a decade at the time we took these photos. The former service station is vacant, but Trotters Evangelical Church is still occasionally used for special events and weddings. On the day of our visit, smoke from distant forest fires clouded the sky in an ethereal veil and created a sublime atmosphere of diffused light. We enjoyed the chorus of crickets who added their voices to the sound of the blowing prairie grass... Ssshhhhhhhhhhhh... Can you hear it? Visually, the road, the occasional telephone pole, and these few structures were our only reminder that this was contemporary time, not the frontier. We believe it is that immediate proximity to the past that makes the prairie special. If you’ve ever wanted to travel back in time, the prairie is one of few places where you almost can. 4

Weâ&#x20AC;&#x2122;ve been told Mr. Hall would sometimes leave the gas pump unlocked so late-night travelers could fill up, on the honor system.

We photographed this church after we discovered it is in danger of demolition due to maintenance costs and black mold. As of early 2015, a group of dedicated residents was trying to save it, but St. Anthonyâ&#x20AC;&#x2122;s fate was still up in the air.

Along Highway 12 in Knox County, not far from the South Dakota border, lies Verdel, Nebraska. It was founded in a different place, some miles away, but when the Chicago & North Western railroad reached this spot on the rolling green prairie carpet near the junction of the Niobrara and Missouri Rivers in 1902, a settlement arose and appropriated the name Verdel. This route is designated the Outlaw Trail Scenic Byway and the drive presents panoramic high plains vistas to travelers. We approached from the east in the morning hours, with the sun at our backs, and enjoyed the view of a rugged and impossibly green river valley carved by the Mighty Missouri. Upon arrival, we chose this little white church as our first subject -- Verdel Presbyterian Church. On January 16th, 1906, thirty-three residents signed a petition and asked the Presbytery of Niobrara to establish a church in Verdel. Seventy-three people pledged cash and labor, and the whole community pulled together to build this little white sanctuary. The total cost to build the church was $2257.28, including $78.30 for the 36-inch church bell you see in the photo. Verdel Presbyterian Church was dedicated on December 15th, 1907. On May 20th, 2007, Verdel Presbyterian celebrated its 100th anniversary with a parishwide celebration of worship services, ice cream and cake, plus bonnets and straw hats for everyone. The breath of life would not last, however, as regular services ended in 2014. 11

We photographed Ringsaker Lutheran Church and School after someone suggested it as a place we should visit. There is a well-maintained cemetery here, and after a short walk down the road, we discovered a rusting, washedout bridge.

Balfour, North Dakota is a vanishing town along US Highway

52, with two notable churches. On the previous page, an abandoned church which once stood in Verendrye, North Dakota, a ghost town where only the facade of the original school remains standing. Below: The beautiful Balfour Lutheran Church, built in 1906.

The last time we visited Balfour, we ran into the Mayor. Heâ&#x20AC;&#x2122;s a younger man than you would expect in a town with a dwindling population. He told us there were still some things to see in the old fire hall, and upon investigation, we found the firefightersâ&#x20AC;&#x2122; jackets still hanging on their hooks. 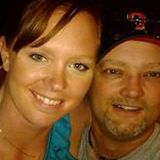 Churches of the High Plains

Churches of the High Plains