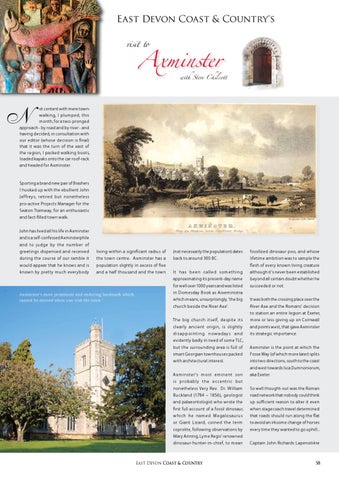 ot content with mere townwalking, I plumped, this month, for a two-pronged approach - by road and by river - and having decided, in consultation with our editor (whose decision is final) that it was the turn of the east of the region, I packed walking boots, loaded kayaks onto the car roof-rack and headed for Axminster.

Sporting a brand new pair of Brashers I hooked up with the ebullient John Jeffreys, retired but nonetheless pro-active Projects Manager for the Seaton Tramway, for an enthusiastic and fact-filled town walk. John has lived all his life in Axminster and is a self-confessed Axminsterphile and to judge by the number of greetings dispensed and received

living within a significant radius of

(not necessarily the population) dates

during the course of our ramble it

the town centre. Axminster has a

would appear that he knows and is

population slightly in excess of five

known by pretty much everybody

and a half thousand and the town

fossilized dinosaur poo, and whose lifetime ambition was to sample the flesh of every known living creature

It has been called something

although it’s never been established

beyond all certain doubt whether he

for well over 1000 years and was listed

in Domesday Book as Aixeministra which means, unsurprisingly, ‘the big

It was both the crossing place over the

church beside the River Axe’.

River Axe and the Romans’ decision

The big church itself, despite its

more or less giving up on Cornwall

and points west, that gave Axminster

to station an entire legion at Exeter,

evidently badly in need of some TLC, but the surrounding area is full of

Axminster is the point at which the

into two directions, south to the coast and west towards Isca Dumnoniorum,

is probably the eccentric but nonetheless Very Rev. Dr. William

So well thought-out was the Roman

road network that nobody could think

and palaeontologist who wrote the

up sufficient reason to alter it even

which he named Megalosaurus

that roads should run along the flat

or Giant Lizard, coined the term

to avoid an irksome change of horses

every time they wanted to go uphill...