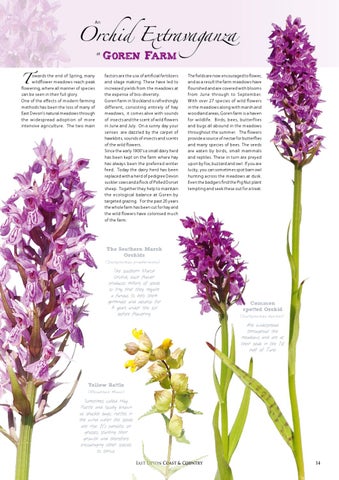 owards the end of Spring, many

flowering, where all manner of species can be seen in their full glory. One of the effects of modern farming methods has been the loss of many of East Devon's natural meadows through the widespread adoption of more intensive agriculture. The two main

Goren Farm factors are the use of artificial fertilizers and silage making. These have led to increased yields from the meadows at the expense of bio-diversity. Goren Farm in Stockland is refreshingly different, consisting entirely of hay meadows, it comes alive with sounds of insects and the scent of wild flowers in June and July. On a sunny day your senses are dazzled by the carpet of hawkbits, sounds of insects and scents of the wild flowers. Since the early 1900â&#x20AC;&#x2122;s a small dairy herd has been kept on the farm where hay has always been the preferred winter feed. Today the dairy herd has been replaced with a herd of pedigree Devon suckler cows and a flock of Polled Dorset sheep. Together they help to maintain the ecological balance at Goren by targeted grazing. For the past 20 years the whole farm has been cut for hay and the wild flowers have colonised much of the farm.

The fields are now encouraged to flower, and as a result the farm meadows have flourished and are covered with blooms from June through to September. With over 27 species of wild flowers in the meadows along with marsh and woodland areas, Goren farm is a haven for wildlife. Birds, bees, butterflies and bugs all abound in the meadows throughout the summer. The flowers provide a source of nectar for butterflies and many species of bees. The seeds are eaten by birds, small mammals and reptiles. These in turn are preyed upon by fox, buzzard and owl. If you are lucky, you can sometimes spot barn owl hunting across the meadows at dusk. Even the badgers find the Pig Nut plant tempting and seek these out for a treat.

The southern March Orchid, each flower produces millions of seeds so tiny, that they require a fungus to help them germinate and develop for 3 years under the soil before flowering.

Are widespread throughout the meadows and are at their peak in the 1st half of June.

Sometimes called Hay Rattle and locally known as shackle bags; rattles in the wind when the seeds are ripe. It's parasitic on grasses, stunting their growth and therefore encouraging other species to thrive. East Devon Coast & Country