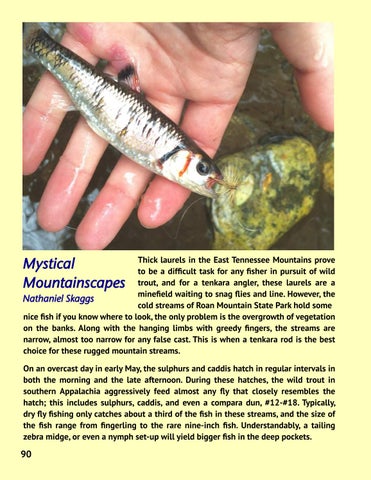 Thick laurels in the East Tennessee Mountains prove to be a difﬁcult task for any ﬁsher in pursuit of wild trout, and for a tenkara angler, these laurels are a mineﬁeld waiting to snag ﬂies and line. However, the Nathaniel Skaggs cold streams of Roan Mountain State Park hold some nice ﬁsh if you know where to look, the only problem is the overgrowth of vegetation on the banks. Along with the hanging limbs with greedy ﬁngers, the streams are narrow, almost too narrow for any false cast. This is when a tenkara rod is the best choice for these rugged mountain streams.

On an overcast day in early May, the sulphurs and caddis hatch in regular intervals in both the morning and the late afternoon. During these hatches, the wild trout in southern Appalachia aggressively feed almost any ﬂy that closely resembles the hatch; this includes sulphurs, caddis, and even a compara dun, #12-#18. Typically, dry ﬂy ﬁshing only catches about a third of the ﬁsh in these streams, and the size of the ﬁsh range from ﬁngerling to the rare nine-inch ﬁsh. Understandably, a tailing zebra midge, or even a nymph set-up will yield bigger ﬁsh in the deep pockets.