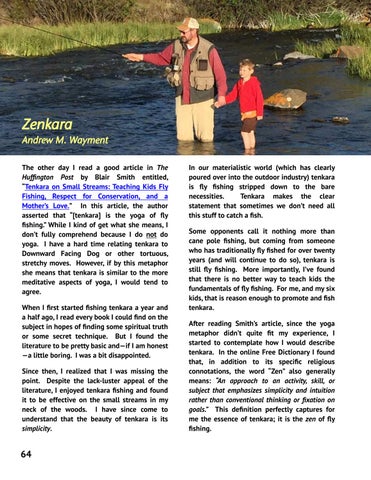 Andrew M. Wayment The other day I read a good article in The Hufﬁngton Post by Blair Smith entitled, “Tenkara on Small Streams: Teaching Kids Fly Fishing, Respect for Conservation, and a Mother’s Love.” In this article, the author asserted that “[tenkara] is the yoga of ﬂy ﬁshing.” While I kind of get what she means, I don’t fully comprehend because I do not do yoga. I have a hard time relating tenkara to Downward Facing Dog or other tortuous, stretchy moves. However, if by this metaphor she means that tenkara is similar to the more meditative aspects of yoga, I would tend to agree. When I ﬁrst started ﬁshing tenkara a year and a half ago, I read every book I could ﬁnd on the subject in hopes of ﬁnding some spiritual truth or some secret technique. But I found the literature to be pretty basic and—if I am honest —a little boring. I was a bit disappointed. Since then, I realized that I was missing the point. Despite the lack-luster appeal of the literature, I enjoyed tenkara ﬁshing and found it to be effective on the small streams in my neck of the woods. I have since come to understand that the beauty of tenkara is its simplicity.

In our materialistic world (which has clearly poured over into the outdoor industry) tenkara is ﬂy ﬁshing stripped down to the bare necessities. Tenkara makes the clear statement that sometimes we don’t need all this stuff to catch a ﬁsh. Some opponents call it nothing more than cane pole ﬁshing, but coming from someone who has traditionally ﬂy ﬁshed for over twenty years (and will continue to do so), tenkara is still ﬂy ﬁshing. More importantly, I’ve found that there is no better way to teach kids the fundamentals of ﬂy ﬁshing. For me, and my six kids, that is reason enough to promote and ﬁsh tenkara. After reading Smith’s article, since the yoga metaphor didn’t quite ﬁt my experience, I started to contemplate how I would describe tenkara. In the online Free Dictionary I found that, in addition to its speciﬁc religious connotations, the word “Zen” also generally means: “An approach to an activity, skill, or subject that emphasizes simplicity and intuition rather than conventional thinking or ﬁxation on goals.” This deﬁnition perfectly captures for me the essence of tenkara; it is the zen of ﬂy ﬁshing.