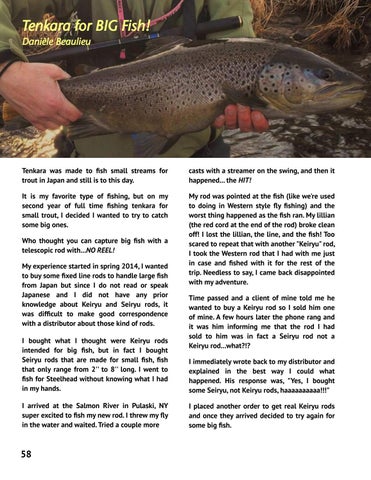 Tenkara was made to ﬁsh small streams for trout in Japan and still is to this day.

casts with a streamer on the swing, and then it happened... the HIT!

It is my favorite type of ﬁshing, but on my second year of full time ﬁshing tenkara for small trout, I decided I wanted to try to catch some big ones.

My rod was pointed at the ﬁsh (like we're used to doing in Western style ﬂy ﬁshing) and the worst thing happened as the ﬁsh ran. My lillian (the red cord at the end of the rod) broke clean off! I lost the lillian, the line, and the ﬁsh! Too scared to repeat that with another "Keiryu" rod, I took the Western rod that I had with me just in case and ﬁshed with it for the rest of the trip. Needless to say, I came back disappointed with my adventure.

Who thought you can capture big ﬁsh with a telescopic rod with...NO REEL!

My experience started in spring 2014, I wanted to buy some ﬁxed line rods to handle large ﬁsh from Japan but since I do not read or speak Japanese and I did not have any prior knowledge about Keiryu and Seiryu rods, it was difﬁcult to make good correspondence with a distributor about those kind of rods. I bought what I thought were Keiryu rods intended for big ﬁsh, but in fact I bought Seiryu rods that are made for small ﬁsh, ﬁsh that only range from 2'' to 8'' long. I went to ﬁsh for Steelhead without knowing what I had in my hands.

I arrived at the Salmon River in Pulaski, NY super excited to ﬁsh my new rod. I threw my ﬂy in the water and waited. Tried a couple more

Time passed and a client of mine told me he wanted to buy a Keiryu rod so I sold him one of mine. A few hours later the phone rang and it was him informing me that the rod I had sold to him was in fact a Seiryu rod not a Keiryu rod...what?!? I immediately wrote back to my distributor and explained in the best way I could what happened. His response was, "Yes, I bought some Seiryu, not Keiryu rods, haaaaaaaaaa!!!" I placed another order to get real Keiryu rods and once they arrived decided to try again for some big ﬁsh.