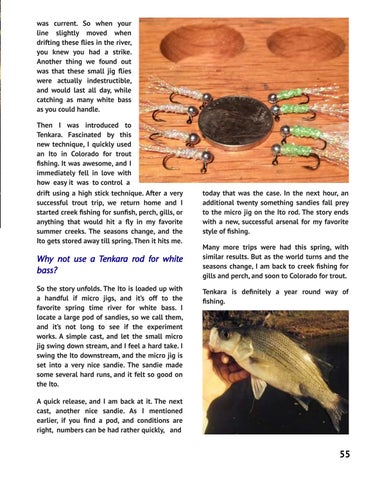 was current. So when your line slightly moved when drifting these ﬂies in the river, you knew you had a strike. Another thing we found out was that these small jig ﬂies were actually indestructible, and would last all day, while catching as many white bass as you could handle.

Then I was introduced to Tenkara. Fascinated by this new technique, I quickly used an Ito in Colorado for trout ﬁshing. It was awesome, and I immediately fell in love with how easy it was to control a drift using a high stick technique. After a very successful trout trip, we return home and I started creek ﬁshing for sunﬁsh, perch, gills, or anything that would hit a ﬂy in my favorite summer creeks. The seasons change, and the Ito gets stored away till spring. Then it hits me.

Why not use a Tenkara rod for white bass? So the story unfolds. The Ito is loaded up with a handful if micro jigs, and it’s off to the favorite spring time river for white bass. I locate a large pod of sandies, so we call them, and it’s not long to see if the experiment works. A simple cast, and let the small micro jig swing down stream, and I feel a hard take. I swing the Ito downstream, and the micro jig is set into a very nice sandie. The sandie made some several hard runs, and it felt so good on the Ito.

today that was the case. In the next hour, an additional twenty something sandies fall prey to the micro jig on the Ito rod. The story ends with a new, successful arsenal for my favorite style of ﬁshing. Many more trips were had this spring, with similar results. But as the world turns and the seasons change, I am back to creek ﬁshing for gills and perch, and soon to Colorado for trout.

Tenkara is deﬁnitely a year round way of ﬁshing.

A quick release, and I am back at it. The next cast, another nice sandie. As I mentioned earlier, if you ﬁnd a pod, and conditions are right, numbers can be had rather quickly, and