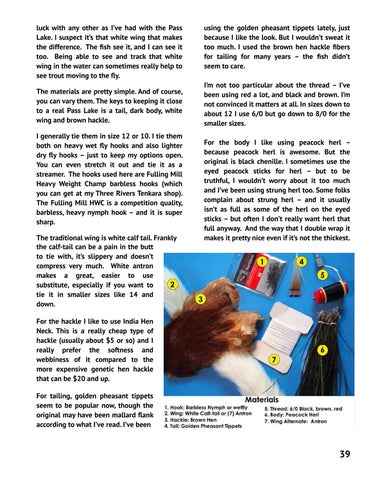 luck with any other as I’ve had with the Pass Lake. I suspect it’s that white wing that makes the difference. The ﬁsh see it, and I can see it too. Being able to see and track that white wing in the water can sometimes really help to see trout moving to the ﬂy.

The materials are pretty simple. And of course, you can vary them. The keys to keeping it close to a real Pass Lake is a tail, dark body, white wing and brown hackle.

I generally tie them in size 12 or 10. I tie them both on heavy wet ﬂy hooks and also lighter dry ﬂy hooks – just to keep my options open. You can even stretch it out and tie it as a streamer. The hooks used here are Fulling Mill Heavy Weight Champ barbless hooks (which you can get at my Three Rivers Tenkara shop). The Fulling Mill HWC is a competition quality, barbless, heavy nymph hook – and it is super sharp.

The traditional wing is white calf tail. Frankly the calf-tail can be a pain in the butt to tie with, it’s slippery and doesn’t compress very much. White antron makes a great, easier to use substitute, especially if you want to tie it in smaller sizes like 14 and down.

using the golden pheasant tippets lately, just because I like the look. But I wouldn’t sweat it too much. I used the brown hen hackle ﬁbers for tailing for many years – the ﬁsh didn’t seem to care. I’m not too particular about the thread – I’ve been using red a lot, and black and brown. I’m not convinced it matters at all. In sizes down to about 12 I use 6/0 but go down to 8/0 for the smaller sizes. For the body I like using peacock herl – because peacock herl is awesome. But the original is black chenille. I sometimes use the eyed peacock sticks for herl – but to be truthful, I wouldn’t worry about it too much and I’ve been using strung herl too. Some folks complain about strung herl – and it usually isn’t as full as some of the herl on the eyed sticks – but often I don’t really want herl that full anyway. And the way that I double wrap it makes it pretty nice even if it’s not the thickest.

For the hackle I like to use India Hen Neck. This is a really cheap type of hackle (usually about $5 or so) and I really prefer the softness and webbiness of it compared to the more expensive genetic hen hackle that can be $20 and up.

For tailing, golden pheasant tippets seem to be popular now, though the original may have been mallard ﬂank according to what I’ve read. I’ve been