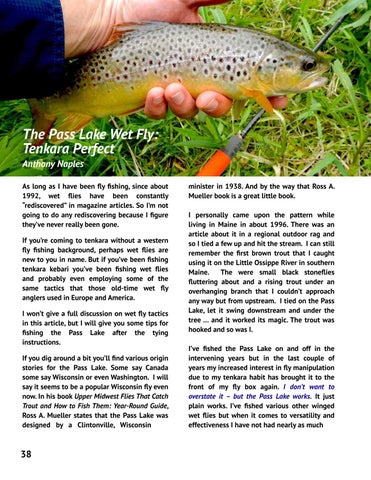 As long as I have been ﬂy ﬁshing, since about 1992, wet ﬂies have been constantly “rediscovered” in magazine articles. So I’m not going to do any rediscovering because I ﬁgure they’ve never really been gone.

If you’re coming to tenkara without a western ﬂy ﬁshing background, perhaps wet ﬂies are new to you in name. But if you’ve been ﬁshing tenkara kebari you’ve been ﬁshing wet ﬂies and probably even employing some of the same tactics that those old-time wet ﬂy anglers used in Europe and America.

I won’t give a full discussion on wet ﬂy tactics in this article, but I will give you some tips for ﬁshing the Pass Lake after the tying instructions.

If you dig around a bit you’ll ﬁnd various origin stories for the Pass Lake. Some say Canada some say Wisconsin or even Washington. I will say it seems to be a popular Wisconsin ﬂy even now. In his book Upper Midwest Flies That Catch Trout and How to Fish Them: Year-Round Guide, Ross A. Mueller states that the Pass Lake was designed by a Clintonville, Wisconsin

minister in 1938. And by the way that Ross A. Mueller book is a great little book. I personally came upon the pattern while living in Maine in about 1996. There was an article about it in a regional outdoor rag and so I tied a few up and hit the stream. I can still remember the ﬁrst brown trout that I caught using it on the Little Ossippe River in southern Maine. The were small black stoneﬂies ﬂuttering about and a rising trout under an overhanging branch that I couldn’t approach any way but from upstream. I tied on the Pass Lake, let it swing downstream and under the tree … and it worked its magic. The trout was hooked and so was I. I’ve ﬁshed the Pass Lake on and off in the intervening years but in the last couple of years my increased interest in ﬂy manipulation due to my tenkara habit has brought it to the front of my ﬂy box again. I don’t want to overstate it – but the Pass Lake works. It just plain works. I’ve ﬁshed various other winged wet ﬂies but when it comes to versatility and effectiveness I have not had nearly as much