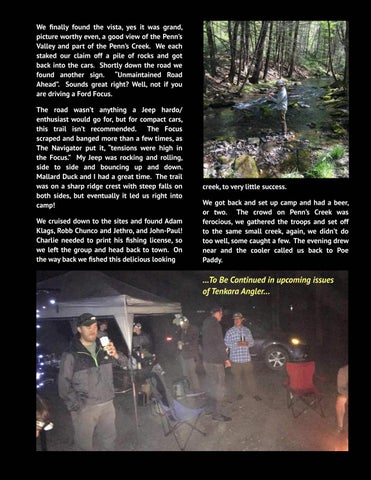 We ﬁnally found the vista, yes it was grand, picture worthy even, a good view of the Penn’s Valley and part of the Penn’s Creek. We each staked our claim off a pile of rocks and got back into the cars. Shortly down the road we found another sign. “Unmaintained Road Ahead”. Sounds great right? Well, not if you are driving a Ford Focus. The road wasn’t anything a Jeep hardo/ enthusiast would go for, but for compact cars, this trail isn’t recommended. The Focus scraped and banged more than a few times, as The Navigator put it, “tensions were high in the Focus.” My Jeep was rocking and rolling, side to side and bouncing up and down. Mallard Duck and I had a great time. The trail was on a sharp ridge crest with steep falls on both sides, but eventually it led us right into camp! We cruised down to the sites and found Adam Klags, Robb Chunco and Jethro, and John-Paul! Charlie needed to print his ﬁshing license, so we left the group and head back to town. On the way back we ﬁshed this delicious looking

creek, to very little success. We got back and set up camp and had a beer, or two. The crowd on Penn’s Creek was ferocious, we gathered the troops and set off to the same small creek, again, we didn’t do too well, some caught a few. The evening drew near and the cooler called us back to Poe Paddy.

…To Be Continued in upcoming issues of Tenkara Angler...