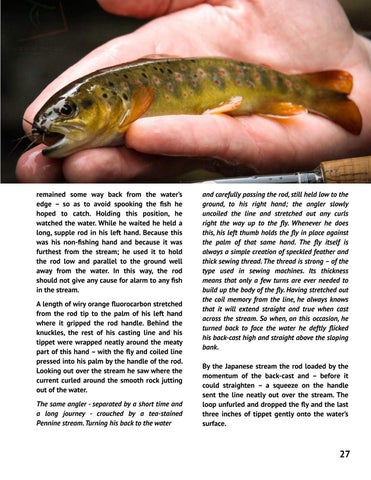 remained some way back from the water’s edge – so as to avoid spooking the ﬁsh he hoped to catch. Holding this position, he watched the water. While he waited he held a long, supple rod in his left hand. Because this was his non-ﬁshing hand and because it was furthest from the stream; he used it to hold the rod low and parallel to the ground well away from the water. In this way, the rod should not give any cause for alarm to any ﬁsh in the stream.

A length of wiry orange ﬂuorocarbon stretched from the rod tip to the palm of his left hand where it gripped the rod handle. Behind the knuckles, the rest of his casting line and his tippet were wrapped neatly around the meaty part of this hand – with the ﬂy and coiled line pressed into his palm by the handle of the rod. Looking out over the stream he saw where the current curled around the smooth rock jutting out of the water. The same angler - separated by a short time and a long journey - crouched by a tea-stained Pennine stream. Turning his back to the water

and carefully passing the rod, still held low to the ground, to his right hand; the angler slowly uncoiled the line and stretched out any curls right the way up to the ﬂy. Whenever he does this, his left thumb holds the ﬂy in place against the palm of that same hand. The ﬂy itself is always a simple creation of speckled feather and thick sewing thread. The thread is strong – of the type used in sewing machines. Its thickness means that only a few turns are ever needed to build up the body of the ﬂy. Having stretched out the coil memory from the line, he always knows that it will extend straight and true when cast across the stream. So when, on this occasion, he turned back to face the water he deftly ﬂicked his back-cast high and straight above the sloping bank. By the Japanese stream the rod loaded by the momentum of the back-cast and – before it could straighten – a squeeze on the handle sent the line neatly out over the stream. The loop unfurled and dropped the ﬂy and the last three inches of tippet gently onto the water’s surface.