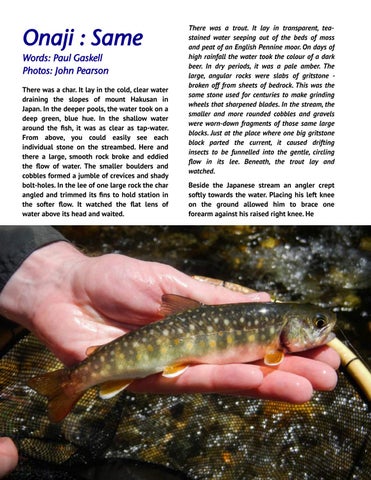 There was a char. It lay in the cold, clear water draining the slopes of mount Hakusan in Japan. In the deeper pools, the water took on a deep green, blue hue. In the shallow water around the ﬁsh, it was as clear as tap-water. From above, you could easily see each individual stone on the streambed. Here and there a large, smooth rock broke and eddied the ﬂow of water. The smaller boulders and cobbles formed a jumble of crevices and shady bolt-holes. In the lee of one large rock the char angled and trimmed its ﬁns to hold station in the softer ﬂow. It watched the ﬂat lens of water above its head and waited.

There was a trout. It lay in transparent, teastained water seeping out of the beds of moss and peat of an English Pennine moor. On days of high rainfall the water took the colour of a dark beer. In dry periods, it was a pale amber. The large, angular rocks were slabs of gritstone broken off from sheets of bedrock. This was the same stone used for centuries to make grinding wheels that sharpened blades. In the stream, the smaller and more rounded cobbles and gravels were worn-down fragments of those same large blocks. Just at the place where one big gritstone block parted the current, it caused drifting insects to be funnelled into the gentle, circling ﬂow in its lee. Beneath, the trout lay and watched. Beside the Japanese stream an angler crept softly towards the water. Placing his left knee on the ground allowed him to brace one forearm against his raised right knee. He